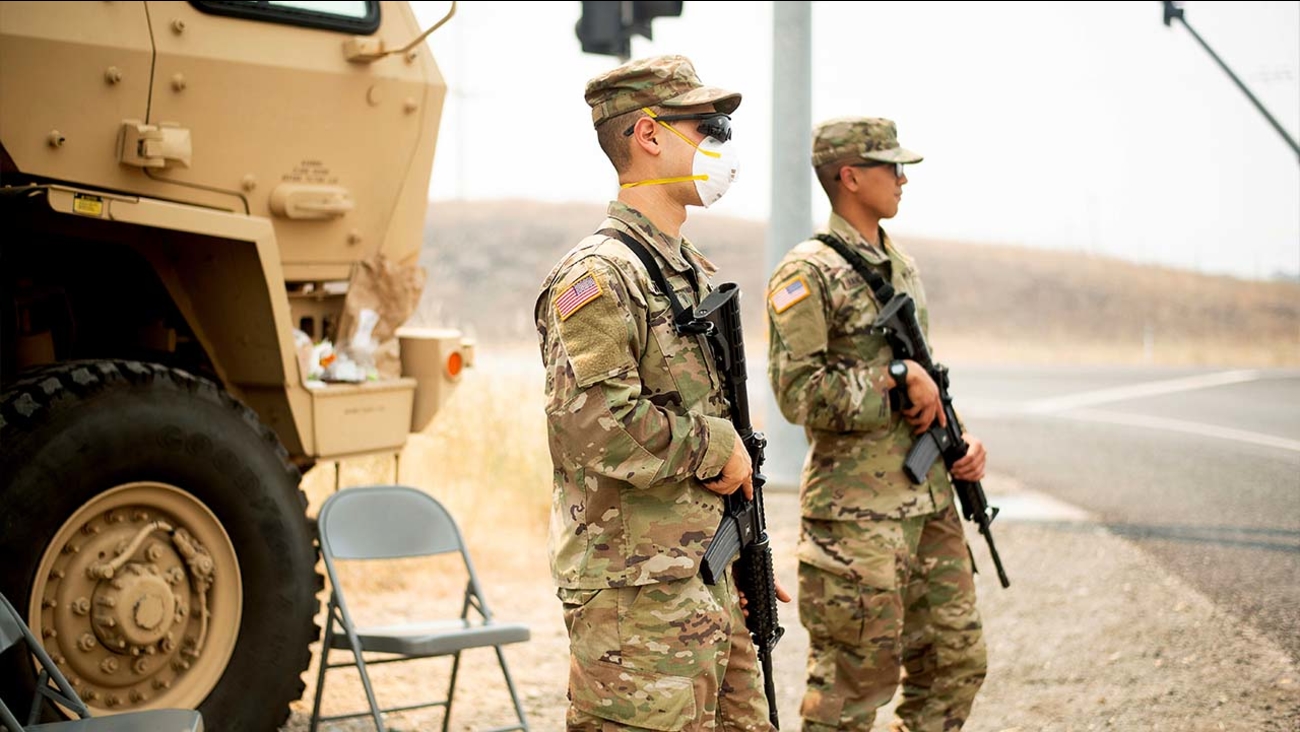 SACRAMENTO, Calif. -- California is calling in the National Guard for the first time next month to help protect communities from devastating fires like the one that largely destroyed the city of Paradise last fall.

It's pulling the troops away from President Donald Trump's border protection efforts and devoting them to fire protection, another area where Trump has been critical of California's Democratic officials - even repeatedly threatening to cut off federal disaster funding.

They will be divided into five teams that will travel around the state working on forest management projects, mainly clearing or reducing trees and vegetation in an effort to deprive flames of fuel.

"They will be boots on the ground doing fuels projects alongside CalFire crews," Mohler said. "We've had them out for flood fighting, several different operations, but this would be the first time their mission would be fuels thinning and forest management."

They have helped fight fires before, however.

He referred questions about the latest effort to CalFire, which is directing the Guard's new assignment.

The training is similar for firefighting and fire protection. Mohler said the troops also will receive some training in forest management, "so they're not just out there cutting brush" but understand why they're doing what they're doing.

That often involves creating fuel breaks. They can range from stripping away all woody vegetation on wide strips of land to thinning larger trees and removing shorter trees, brush and debris to discourage fires from climbing into treetops and jumping from tree to tree.

Critics say the work damages forests and can be useless against wind-driven fires, like the one that jumped a river to rain embers on the Sierra Nevada foothills community of Paradise last year, killing 85 people in and around the Northern California city of 27,000 people.

"CalFire is taking the Trump approach, logging the forest and weakening critical environmental protections, and that's the exact opposite of what we need to be doing," Center for Biological Diversity scientist Shaye Wolf said.

"It's not a problem that's going to get fixed overnight," Mohler said.

Such thinning operations are getting more attention in recent years, with the U.S. Forest Service estimating last month that 18 million trees died in California over the last year.

The agency estimated that more than 147 million trees have died across nearly 15,625 square miles (40,469 square kilometers) during a drought that began in 2010, while about 1.5 million dead trees have been cut down.

Moreover, investigations have often blamed recent wildfires on utilities not doing a good enough job of clearing vegetation around power lines and equipment. Democratic state Sen. Bill Dodd of Napa has proposed legislation that would require CalFire to tell utilities which trees and brush to remove and then inspect the work.

Aside from Guard troops, CalFire also is creating 10 civilian fuels management crews this year. The 10-member crews could help with initial fire suppression if need be but will primarily reduce fuels, Mohler said.