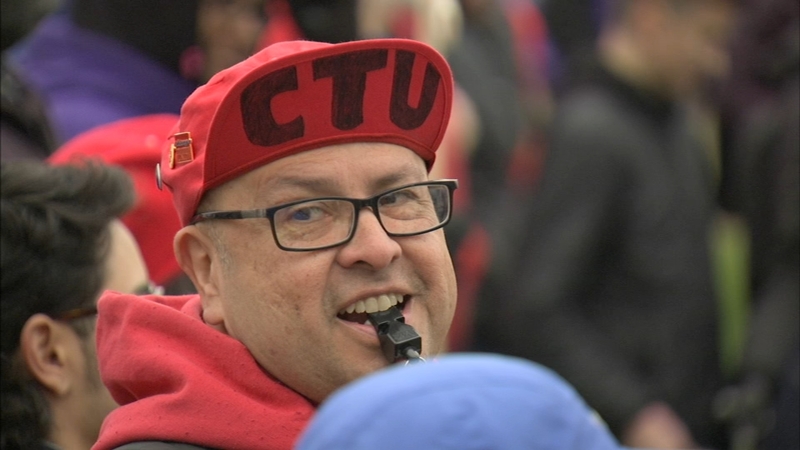 CHICAGO -- The Chicago Teachers Union and Chicago Public Schools are spending their second weekend at the bargaining table despite what school district negotiators call a "breach of trust" by the teachers.

CPS didn't elaborate on how CTU broke the district's trust, and union leaders said they didn't understand either. No deal was reached on Saturday, but both sides said the priority is to finally reach a deal that would bring an end to a strike that's entering its 11th day.

"We're serious about trying to get a deal," CTU President Jesse Sharkey said. "We obviously need to be able to come back and look our members and the students and the community and the city of Chicago in the face and say we did something good for schools."

According to the Chicago Sun-Times, the alleged "breach of trust" involves a document leak that reveals key details of the negotiations, showing that both sides remain $71 million apart for the first year of the contract.

An expert on labor and employment relations, Bruno said that in some ways, the current standoff is a continuation of the 2012 strike, where issues other than teacher compensation became central to the bargaining process.

Both said closure is a top priority for ongoing negotiations at Malcolm X College.

"We left the table last night really determined to bridge the divide across the table on some of the really big key issues that are still at play that we are going to be addressing," CPS Chief Education Officer LaTanya McDade said on Saturday.

Sources close to negotiations said tentative agreements have been reached on some 80 issues, but CPS and the CTU haven't reached a deal on main issues. Those include: class size, staffing and enforcement language for those provisions - along with salary increases for teacher support staff workers.
"Most CPS support staff who are black and brown are chronically unpaid, living paycheck to paycheck just to make ends meet and we don't. That isn't right," said Science Meles, of SEIU Local 73.

Twenty-six thousand CPS teachers and 8,000 CPS support staff workers are now walking the picket line. The longest ever Chicago teachers strike was back in 1987, which lasted 19 days.

"We will continue to bargain in good faith and work really hard to get to a place where we can reach an agreement that gets our students back in the classroom as soon as possible," McDade said.