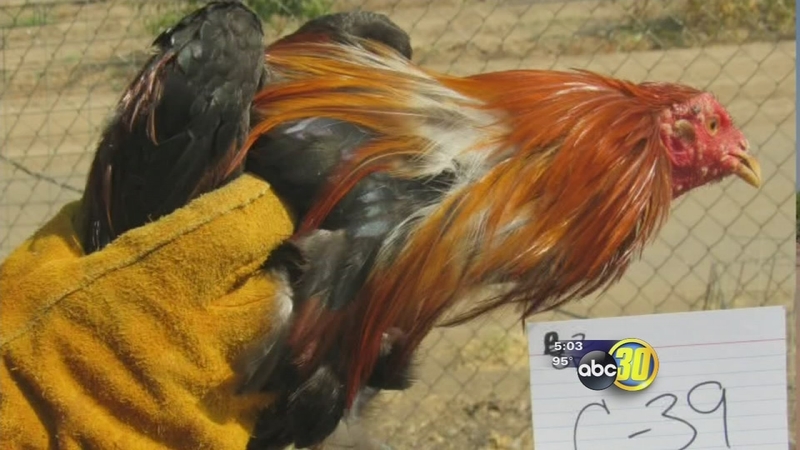 REEDLEY, Calif. (KFSN) -- Reedley Police are investigating a possible cockfighting ring, but they're not sure who the birds belong to or where they're being sent.

Last week, they found 150 birds on a vacant lot on Zumwalt Avenue, which used to be a farm labor camp. Reedley Police believe the property has recently served as a place to raise roosters involved in cockfighting. Police and Central California SPCA also found fighting gaffs and medicine used to make the animals more aggressive.

Authorities say they first went to the vacant property to check on reports of neglected dogs, but they found much more.

"It is not normal for people to have so many roosters in the home and that's usually another sign of there is something going on," said CCSPCA Spokesman Walter Salvari.

During the bust, 50 roosters were euthanized on site. Some others were brought to the shelter and are considered evidence. Many hens were seized, including about ten healthy ones who are up for adoption. The chicks found on site have already been adopted out.

"This situation is not uncommon for the central valley," Salvari said. "The problem is that a lot of people do not call us and let us know this is happening,"

Reedley Police don't think cockfighting was happening at the site, which is about a block away from a K-8 school. But they do believe it's where fighting birds were raised and fed. They've sent their report to the Fresno County District Attorney's office.

So far, no arrests have been made and the case is still under investigation. Reedley's Police Chief says the property owner hasn't been on site in a long time, and is in the process of selling it and tearing the buildings down.