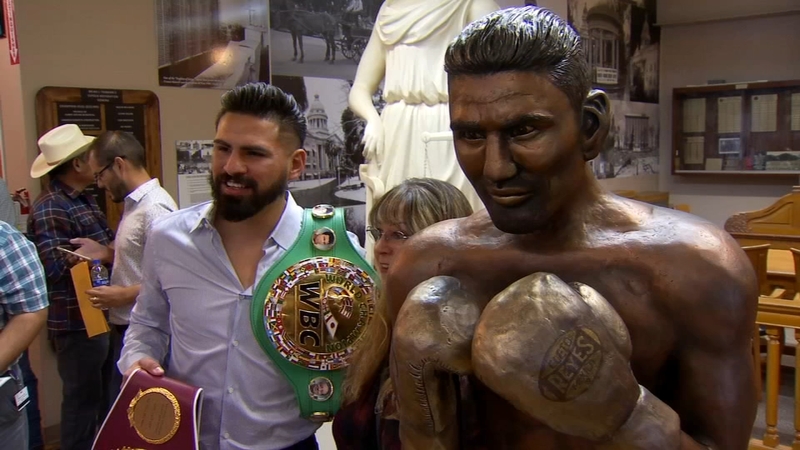 Seeing his statue and hearing so much praise had Ramirez thinking about his long journey from the fields to the top of the boxing world.

The unveiling of his statue at the Big Fresno Fair Historical Museum moved him to tears and floored the champ.

"Outside of the belts, the money, the fame, is the respect. It's the pure loyalty, the love. That means everything," Ramirez told a packed house of supporters.

In the ring Jose can keep his emotions in check, but at the unveiling, it was difficult. I asked him,

Dale Yurong: "Did it just kind of build up, your journey of your whole life up to this point?"

Ramirez: "I didn't expect this much, to be honest. It really moved me you know. It opened my eyes like they've never been opened before."

Fair CEO John Alkire paid tribute to Jose's father Carlos, "The story, the legend of you son will live on so thank you for doing such a tremendous job."

Jose enjoyed the smirk on the face of the sculpture. It was created by local artist Debbie Stevenson.

She explained of her work, "Just his physicality. I wanted to capture all the muscle tone. I'm just such an admirer of Jose anyways."

One of Jose's title belts bought during an auction for $15,000 by Chris Gamber of Avenal was donated to the museum.

John Bowers of Avenal said of Jose, "You make everyone in your hometown very proud and the central valley. Everybody walks with pride now."

"The older I got, my only goal was to inspire, to motivate people," Ramirez said.

The statue and belt will be enclosed on the second floor of the museum.