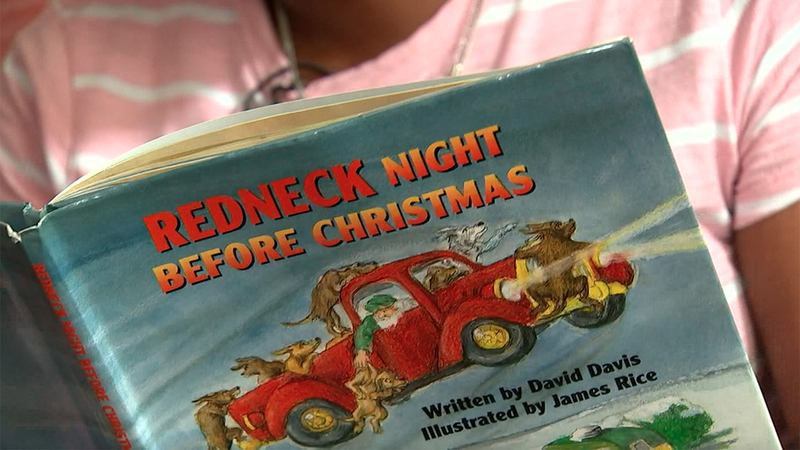 ROWAN COUNTY, N.C. -- A North Carolina mom is raising questions after her daughter checked out a Christmas book from her school library that featured Santa Claus carrying a sack stamped with a Confederate flag.

Latoya Martin, from Rowan County, said her 8-year-old brought home a book titled "Redneck Night Before Christmas" to read with her family.

"It broke my heart," Martin said.

She said the book from Mount Ulla Elementary School's library showed at least five images of the Confederate flag and a man holding a gun.

Martin said the flags drawn across Santa's sack were covered with Post-it Notes, which tells her that someone knew it would be offensive but left it on the school's shelves anyway.

"How many homes has the book been in and nobody has reached out to the school?" she said. "How did it come into my hands?"

In an email, the school's principal told Martin that she was shocked to learn that this book was in the library as well. The principal said Mount Ulla Elementary received the donated book at the beginning of the year from another school that closed down.

The principal also acknowledged that the school should have been more proactive in screening donated books and reviewing items on library shelves.

Martin said the incident has led to a conversation with her daughter, who, until now, had no idea what the Confederate flag represents.

"She is the only African American in her class ... It makes me emotional because as a parent, I want to protect my child, and I want my child to be a kid," she said. "I don't want them to have to worry about all of the hatred in the world."
Report a correction or typo
Related topics:
societynorth carolinaconfederate flagbooksschoolschristmasu.s. & worldrace in america
Copyright © 2022 KFSN-TV. All Rights Reserved.
TOP STORIES
Man charged with murder of 2-year-old whose father died a year earlier
How reliable are rapid tests? Dr. explains when to depend on results
Is there home appraisal bias in Fresno? Professionals weigh in
Housing Watch: Million-dollar homes at Ventana Hills in Fresno County
Valley Children's Hospital delaying some non-urgent surgeries
Good Sports: Fresno woman gains recognition with indoor rowing
Valley ag business continues to feel impact of supply chain issues
Show More
Family of 5 displaced after house fire in southwest Fresno
Merced police searching for missing 87-year-old man
Website for free COVID tests is here. How does it work?
Biden, 1 year in, says nation weary from COVID but in a better place
Man suffered severe burns after explosion at Table Mountain Casino
More TOP STORIES News