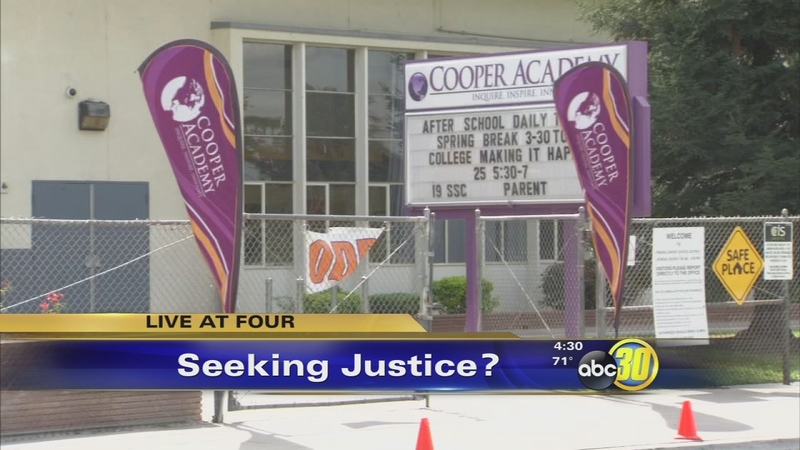 FRESNO, Calif. (KFSN) -- A mother and stepmother were arrested for assaulting their son's bullies. The two women, plus the 12-year-old boy are all facing charges relating to what turned into a violent confrontation back on March 17. The incident happened after school in the cafeteria. Fresno police say the two women were sick of hearing about the boy getting bullied, so they decided to confront the bullies themselves.

More than 100 people were witnesses as three carloads of people showed up to Cooper Academy and came face-to-face with two girls ages 12 and 13. Fresno police say the people were upset that the girls were bullying their family member, a 12-year-old who is a classmate of the girls.

Fresno Police Lt. Joe Gomez said, "The little boy was there, too. He wasn't involved in the fight, but clearly he pointed out the two teenagers that were allegedly causing him problems."

The boy's mother, Teri Don Johnson, and stepmother, Inez Hernandez, were arrested for assaulting the two girls, though investigators say they didn't receive any notable injuries. The boy's 15-year-old sister also got involved.

Gomez said, "The 15-year-old sister was arrested for the felony charge of conspiracy, and also she assaulted a school official who was trying to break it up - probably pushed her back or punched her - and the little boy was also arrested for the conspiracy charge."

Even though the boy was the one who claimed to be bullied, he was arrested for helping initiate the fight by his family members. Authorities say the boy had been complaining about being bullied by the girls for months and that the parents of the boy had talked to administrators about the problem but felt that nothing was being done about it.

"Fresno Unified School District takes these incidents very seriously. The safety and security of our students and staff is our top priority. We applaud the efforts of the school's safety and security team that prevented the matter from escalating further and the Fresno Police Department for investigating and arresting suspects in connection with the incident. Fresno Unified is currently investigating the incident to determine any possible disciplinary action. In an event where disciplinary action is required, the District follows a specific process as outlined by California Education code."

Parents told Action News, while they don't condone the mothers' acts of violence, they can understand how they felt they had to take matters into their own hands.

Michelle Balladarez, a parent, said, "I've been in a situation where my daughter was getting bullied, and I requested over and over for something to be done, and nothing's ever been done."