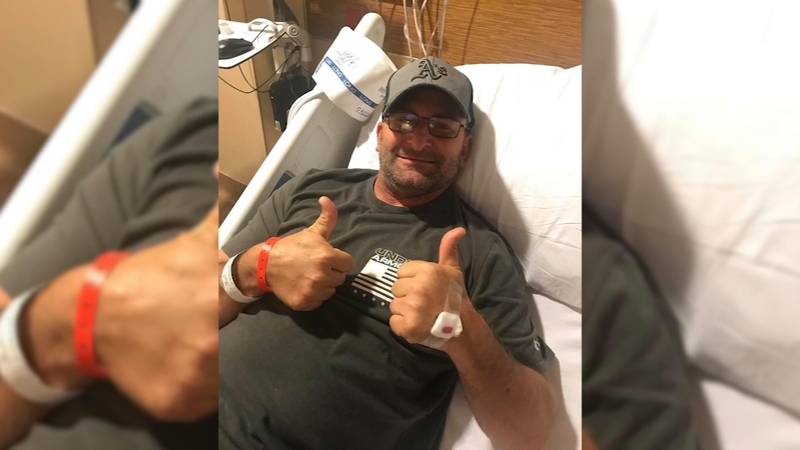 Dozens of law enforcement officers and community members gathered to welcome home one of their own on Friday.

After suffering a stroke at the age of 43, officer Darren Morrison developed Holmes Tremor.

He was recently matched with doctors at UCSF and underwent brain surgery for the rare condition.

Coordinating the parade was Darren's wife Megan and her work family at Anderson Striping and Construction.

Project coordinator Amanda Haynes said, "We wanted to show him without a doubt the family here at Anderson Striping supports him."

CHP Sgt Mike Trenholm said, "When you put the uniform on you become part of a very proud team."

A delighted Officer Morrison said, "It's a huge family. I'm just blessed to be a part of it. I'm going to miss it that's for sure."

After spending several years on the force with Tulare County and Dinuba Police, Officer Darren Morrison served 18 years with the California Highway Patrol, a job where he'd meet his wife Megan, who was a dispatcher at the time.

With the support of his wife and their six children, he kept his spirits up despite the rarity of his condition.

"I got lucky. Dr. Starr at UCSF is one of the best in the world," says Morrison.

The couple spent their anniversary at the hospital where Morrison received Deep Brain Stimulation.

The device implanted during surgery is a new treatment for Holmes Tremor, something his doctors at UCSF say will end up in medical journals.

Though his time on the force has come to an end, Officer Morrison's commitment to helping others will continue. He says he's thankful "it's going to give so many other people the hope that they can get better and there's a way to get better."
Report a correction or typo
Related topics:
community & eventsparadesurgeryucsf
Copyright © 2021 KFSN-TV. All Rights Reserved.
PARADE
Dancing Grannies make 1st public appearance since parade tragedy
Child is 6th person to die in deadly Wisconsin parade crash
Wisconsin Christmas parade survivor describes 'screams and chaos'
Hanford's annual Christmas parade returning this year
TOP STORIES
Fresno State announces return of Jeff Tedford as head football coach
Scott Peterson resentenced to life for pregnant wife's murder
Plan unveiled for CA to be abortion sanctuary if Roe overturned
Fresno teacher gets millions of views on TikTok with dance moves
Series of storms to bring rain, snow to Central CA
Family of 5 from Fresno killed in shooting in Mexico
Man hospitalized after hit-and-run crash in central Fresno
Show More
Michael Strahan's Blue Origin space flight pushed to Saturday
Pfizer says COVID booster offers protection against omicron
Californians cut water use 13% in October; still behind goal
Gunmen on jet skis open fire into the air at beach near Cancun hotel
Andreas Borgeas will run to replace Devin Nunes in Congress
More TOP STORIES News