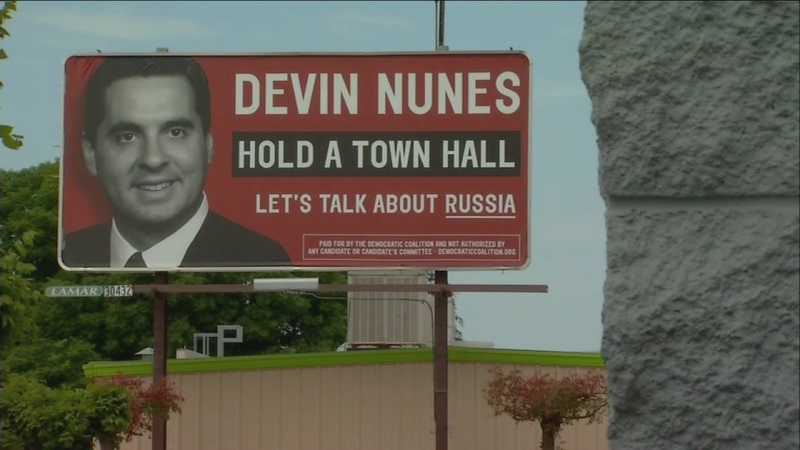 VISALIA, Calif. (KFSN) -- A new billboard in Visalia calls on Congressman Devin Nunes to answer to his constituents by holding a town hall meeting. The sign was put up last week and placed above the westbound lanes of Highway 198.

The sign is simple: Nunes' face and name along with eight words, "Hold a town hall. Let's talk about Russia."

The Democratic Coalition is a super PAC that says it's the home of the anti-Trump movement for Democrats. Lerner says they recently raised money for the sign through social media crowdsourcing.

It's clearly visible to any passing vehicles and strategically placed just a few minutes from the congressman's Visalia office.

Lerner claims Nunes, the House Intelligence Chair, obstructed the committee's investigation into Russian interference in the 2016 election by receiving classified information and being too close to the Trump team.

He says it was only when organizations like the Democratic Coalition put pressure on him that he recused himself from the investigation.

"The issue now though is he's really stuck his head in the sand, and now he's not really answering at all to his constituents, which is literally his job," he argued. "You know it's his one job, in fact, to represent them, and I'd imagine it's hard to do so when you're not holding towns halls or meeting with them."

Outside Nunes' Visalia office, Action News spoke to some of Nunes' constituents about the billboard. Kelli Avila says she's voted for Nunes before.

While Nunes is not obligated to hold a town hall meeting, she says it would show respect for people like her who put him into office.

"I think everybody's got their opinions on should he have kept it to himself? Should he have gone a different route of delivering information? Is there a better way? You chose what you chose, would you do that again?" she said.

"Since I seen the Russia part, I would probably (be) interested, because I know that the United States has problems with Russia, so something maybe I would want to look into," Karen Rico of Dinuba said.

Lerner says the sign's message should be clear to all members of Congress, not just Nunes: "If you obstruct the Russia investigation, we'll hold you accountable in a very visible way.

Action News reached out to congressman Nunes' communications director, and he says "it's hardly surprising that a Democratic Party organization, dedicated to electing Democrats, would rent a billboard criticizing a Republican congressman."