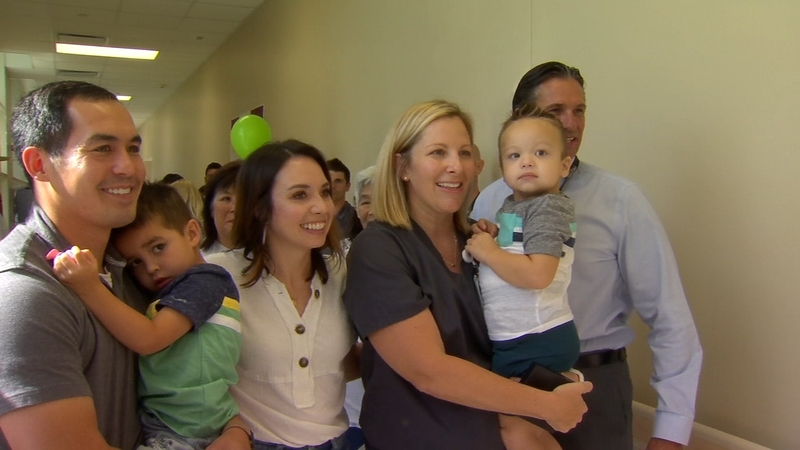 FRESNO, Calif. (KFSN) -- Susie LeRoy was greeted with cheers and chants Friday for her kidney donation to two and a half-year-old Kaleb Perry of Kingsburg.

Kaleb's parents call Susie an angel for the gift she gave Kaleb that has already dramatically improved his outlook and immediate health. The toddler has Prune Belly syndrome and his kidneys were failing fast.

"We love you so much and we wouldn't be here without you. I don't even have the words. I hope you know that," said Kaleb's mother, Mandy Perry.

"He's just doing so much better with eating and just growing and wanting to try new things," Kaleb's father, Kevin Perry, said. "Before that, he just did not want to eat because he was just feeling yucky all the time with the kidney disease."

Susie initially thought she would be praying for the family, along with hundreds of others, until she learned she was a match. The donation happened on May 28th at Stanford.

"It's been amazing. It's truly what they say, it's better to give than to receive. It's been a total blessing for me," she said.

Susie works in the emergency department at Community Regional Medical Center. She's followed Kaleb's journey the past several years and seen his struggle with the syndrome and its devastating effects.

"He's the cutest little boy ever. I mean I have a three-year-old, too, but it's just he's just doing so well and it's so heartwarming and amazing," she said.

So far, Kaleb's body has accepted and adjusted to the new kidney well. Healing from the operation has taken several months.

"He's been doing well. The kidney is working for him so it's given him life."

As she walked the hallway Friday, tears streamed down Susie's face. She never expected the gesture of gratitude for doing what she just felt was right.

"So I don't think part of me is in him, I'm just happy that I was able to play a role in him doing so well," she said.

"She's so selfless and she told us it was never my kidney, it was always Kaleb's and I was just holding it for him. So it was like, she is just a gift," said