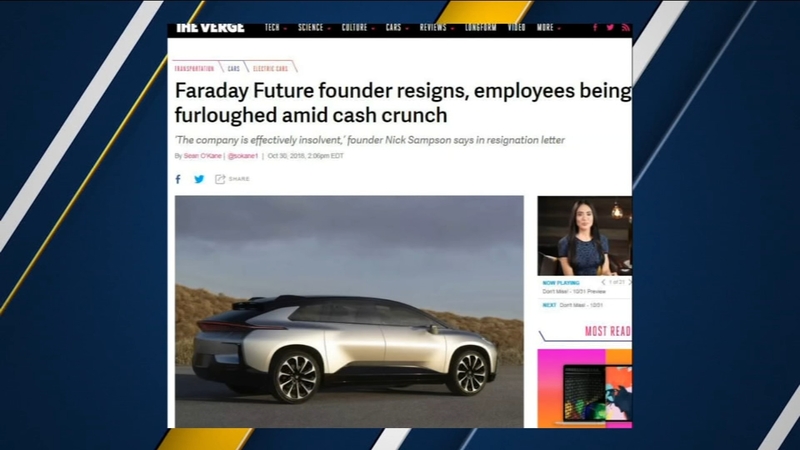 The future of an electric car company is uncertain, as the company reveals a financial crisis.

Faraday Future is based in Southern California but is developing its electric car at a manufacturing plant in Hanford.

This week, reporter Sean O'Kane revealed (https://www.theverge.com/2018/10/30/18040936/faraday-future-founder-resigns-employee-furlough-shutdown) the electric car startup was shutting down some operations at its Gardena Headquarters and manufacturing facility in Hanford.

He also obtained an e-mail from Faraday's CEO, which announces furloughs and pay cuts.

The same day, the company released a statement saying its Chinese investor Evergrande had pushed it into a cash crunch, attempting to gain control of the company and failing to deliver funding it promised.

ABC30 reported on that dispute earlier this month. (https://abc30.com/faraday-future-fights-with-chinese-investor-as-production-nears-at-hanford-plant/4450362/)

Faraday's statement goes onto say that Evergrande's actions have caused an unexpected financial crisis and that the company has taken unfortunate drastic measures to reduce salaries and head-count until funding becomes available.

"We don't have a lot of information," said Kings County Economic and Workforce Development Director Lance Lippincott. "I understand that the situation's constantly evolving and that the company is really working on the forefront of it."

It's unclear just how many Hanford employees have been laid off, furloughed, or had their pay cut, but Lippincott confirms the Kings County Economic Development Corporation has conducted outreach to affected employees.

Faraday Future has repeatedly said it would hire 1,300 people at the Hanford plant, the vast majority of them local.

"For the Job Training Office specifically, we're standing by in cooperation with the company and our partners at the employment development department to respond to any needs they have, to provide services in the event of any layoffs," Lippincott said.

Lippincott says Faraday has been an excellent partner to work with since they took over the old Pirelli tire factory last year.