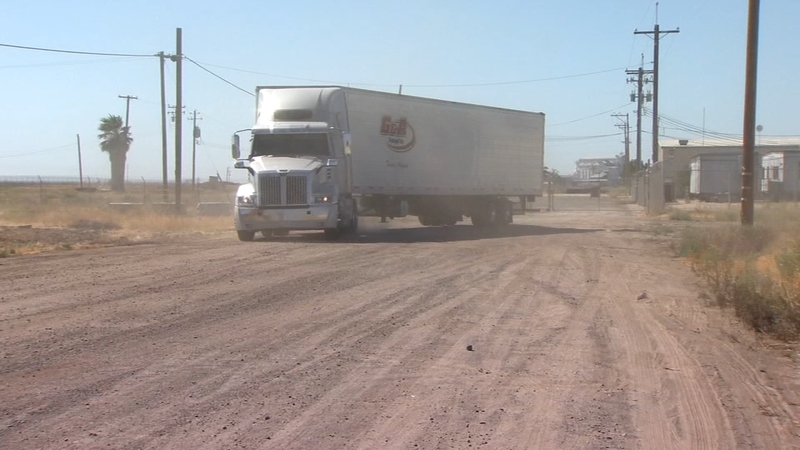 FIREBAUGH, Calif. (KFSN) -- A man is in the hospital Tuesday after being accidentally run over by a semi-truck.

It all started Monday in Firebaugh after the man, who was a passenger in that truck, and the driver got stuck on a dead end road. The passenger got into an altercation with a property owner in the area, when things escalated.

The victim is from Philadelphia and at last check is listed in critical condition at Community Regional Medical Center.

Firebaugh Police say the criminal investigation is still ongoing, but now the City is getting involved to see whether the property owner had the right to line a City street with barricades.

It was Monday at noon when Firebaugh Police were called to a business at 12th and M. When they arrived, they found a man who had been accidentally run over by a semi-truck. It happened after the pair got stuck on the dead end road.

Firebaugh Police officer Fernando Martinez says, "a truck driver along with his partner drove into a lot that was later determined to be private property. They were granted access by an employee."

According to Firebaugh Police, when the driver tried to exit the lot, the owner of the business refused to let them leave without paying a $50 fee. The passenger jumped out.

"The driver not realizing a physical altercation was going on near the rear of the trailer and at some point, during the altercation, the 24-year-old male out of Philadelphia was run over by the trailer portion of the semi truck," Officer Martinez says.

First responders say the man was air-lifted to CRMC with injuries to his abdomen and pelvic region.

"We checked out the area and discovered turn offs were blocked off by concrete barricades. Those barricades were put there by the property owner, which ultimately funnels in vehicles that are unfamiliar with the area," says Martinez.

By Tuesday, the barricades were moved and positioned in a way that blocks the private property only.