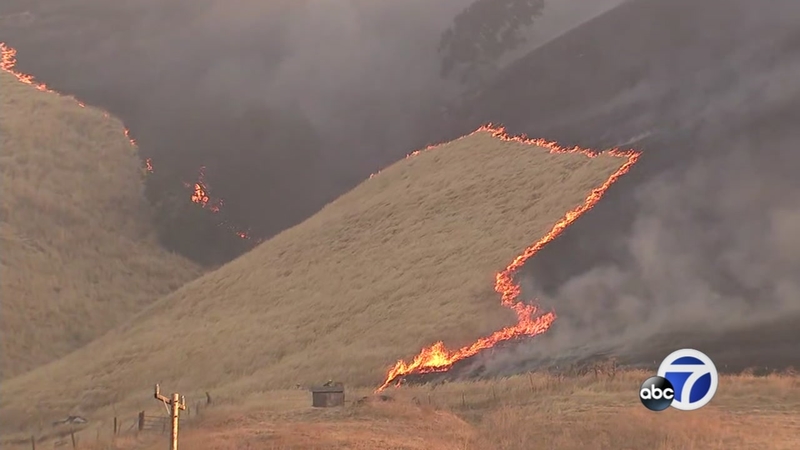 Firefighters making 'good progress' with fires burning next to Clayton

CLAYTON, Calif. -- Several fires in the Clayton area have prompted a shelter-in-place for residents near Marsh Creek Road. Calfire estimates 655 acres are burning along Marsh Creek.

Officials warn those who live on Marsh Creek between Morgan Territory Road and Deer Valley Road to close all windows and doors and stay indoors until further notice.

Shelter In Place Still in Effect South of Clayton Due to Fire
People on Marsh Creek Road between Morgan Territory Road and Deer Valley Road are advised to Shelter In Place. Please monitor local media and official social media for developments.https://t.co/tE53wsUOQV pic.twitter.com/j36uWBpzja

At 9:40 a.m., Cal Fire tweeted that firefighters are "making good progress" on the fire.

Aircrafts are on scene for additional support, officials said.

A viewer named Nita spoke with ABC7 News on Saturday morning about what she saw when she woke up.

"We were sleeping and the dogs woke us up crying," she said. "I took the dog outside and you can smell that heavy smell of smoke. I looked up and over the horizon you could see the orange glow. It's too close. It's kind of sporadic farmland but we do have neighbors and as I was outside with the dog, our neighbor drove by and yelled out the window 'we got a fire pretty near.' My husband went with him to check on the livestock to make sure everything is ok. The fire has reached the neighbor's cow pond."

She went on to say, "I did receive an alert on my cell saying that there's a shelter-in-place in Clayton. As of yet there is no evacuation. We're just indoors waiting, we have everything ready if we need to evacuate and if we need to get the animals out, that would be my only concern. There have actually been a couple fires in this area since we've lived here. We've been here for about four years. I do know the firefighters are working very hard, they're there on the other side of it and they do have the bulldozers going."

A viewer tells us the mobile home park on Marsh Creek Road has been given the all clear to return to their homes.

They were evacuated around 3 a.m. this morning.