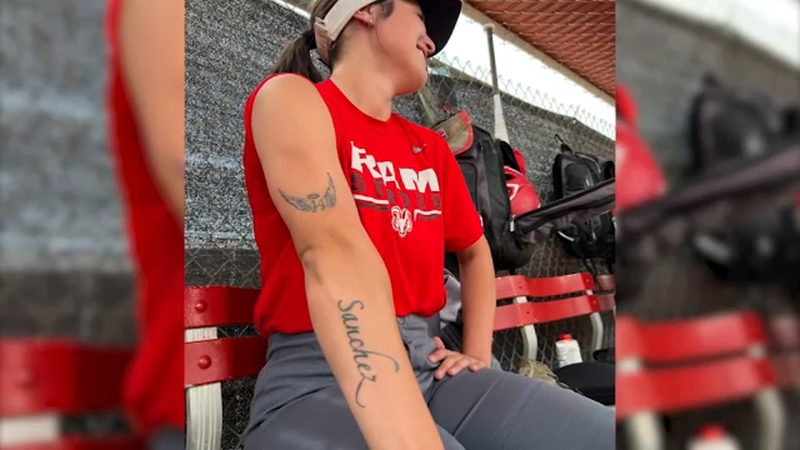 "I have a lot of things that I go through and softball is just my release," Sanchez said.

Last season the Clovis North grad won both a league and section title.

Now -- a freshman at City -- the catcher has been dominant at home, hitting over .400 at the plate, helping lead Fresno to a Conference Title for the second year in a row.

Along the way, the Rams rattled off a 21-game win streak.

"The win streak was amazing, every win was awesome," Sanchez said.

FCC's head softball coach, Haley Janzer, is just happy to have Sanchez on board.

"She's made us better athletically on the field," Janzer said. "But just her person, who she is, who she was brought up to be has brought us to another level, I think."

But Sanchez's journey as a Ram hasn't been as easy at it looks.

"In the fall season, I was enrolled at Butte College playing there as an outfielder," Sanchez said.

"My brother was going back to college on his way there, and we got the news," Sanchez said.

Lina's older brother, JJ, was on his way back to play his final season of baseball at Westcliff College when his car veered off Highway 99 into a tree. He died on impact.

That's when Lina got in contact with Coach Janzer -- a decision that would keep her close to family and keep her playing the games she loves thanks to coach Janzer.

"She was accepted into our Ram fam immediately and our arms went around her immediately," Janzer said.

"Making new friends here was just so easy," Sanchez said. "This program is amazing. Again, thanks to Coach Janzer. I wouldn't be here without her."

Before her brother's time at Westcliff, JJ was also a part of the Ram family, playing baseball under Ron Scott.

"16 was his previous jersey number," Sanchez said. "It was truly a blessing to receive his number and play in his honor."

Not only is JJ's number across her back, but his memory forever kept alive on her arm.

"He's my angel," Sanchez said. "Seeing so many things that remind me of him, I just had to get something tatted on me with the angel and him to remind him that he's always with me."