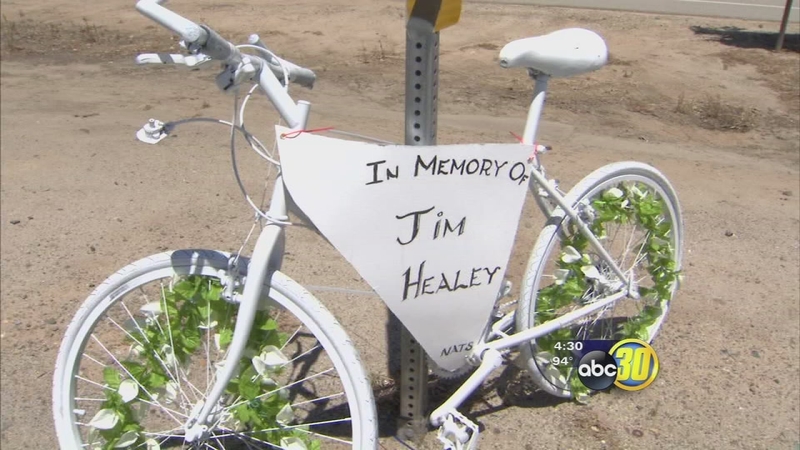 FRESNO, Calif. (KFSN) -- Amid the busy traffic of Fresno, a white lone bike stood out.

What's being called a "ghost bike" honors the loss of local cyclist Nick Bukilica who was hit by a car in February.

"Ghost bikes are white bikes," Steven's Bicycles manager Devin Bovee explained. "They're usually locked to something in an area where someone was run over or had some so sort of major injury or passed away on a bicycle."

Cyclists taking part in Wednesday night's Ride of Silence will pass other ghost bikes along the 9-mile route.

They'll start their 7:00 p.m. ride at Steven's Bicycles at Willow and Nees Avenues.

"It's just something to get a big group of bicyclists to ride around town and create awareness," Bovee said. "If you see a big group it kind of puts bicycle riders or people on bikes in your mind, maybe you'll pay more attention or watch out for them next time."

The city of Fresno has launched a cycling safety spot.

It was produced by the Bicycle Pedestrian Advisory Committee.

Tony Molina with the committee says with so many new bike lanes and added bike trails, motorists need to keep a closer eye on cyclists.

"For the cyclists, we want to try to teach cyclists that they need to act and be treated as drivers of vehicles," he said.

"That means stopping at stop signs, riding with traffic, avoid riding on the sidewalk."