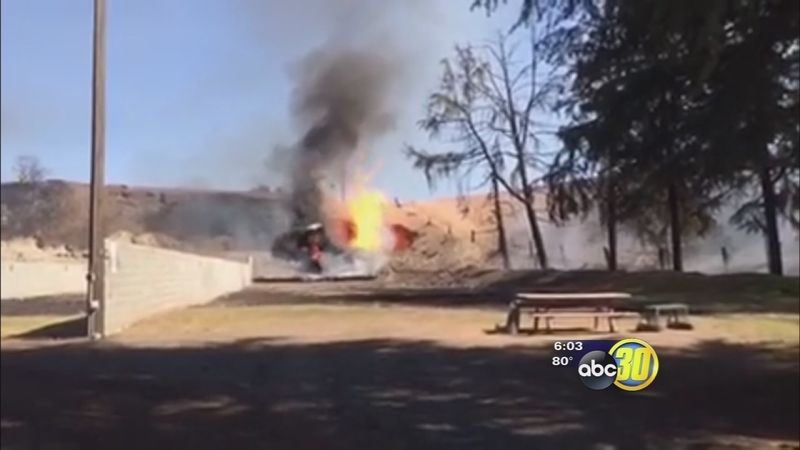 FRESNO, Calif. (KFSN) -- One of what is expected to be several lawsuits has been filed in the major gas explosion at the Fresno County peace officers gun range. Three burned inmates have now joined in this legal action. Their attorney says he filed so fast to make sure no evidence is destroyed.

Five days after being burned in a gas pipeline explosion, a picture was taken of one of the victims. Sam Ouk was burned on his face, head, neck and right arm in an explosion that his attorney says has also left deep emotional scars for everyone involved.

"There are some in the hospital that are still heavily sedated, and they are having nightmares, they are screaming," said attorney Butch Wagner.

Wagner says one of the victims is burned on 80 percent of his body. The lawsuit asks for medical expenses, lost wages, emotional distress and pain and suffering.

Ouk is in custody on charges of being in possession of a stolen car. He is now recovering at the Fresno County Jail. He is a mechanic by trade, and right now it's too soon to tell if the burns will limit his capacity to work in that job.

So far, three inmates who were burned in the explosion are seeking damages from both Fresno County and Pacific Gas and Electric.

Wagner has countless questions he wants answered, including who authorized the project and who was overseeing it when the explosion happened.

"The employee who was driving the tractor probably was not given the proper supervision about where to use that backhoe and how to use it and to beware of that pipeline," said Wagner.

The lawsuit alleges PG&E was negligent and didn't install and maintain the line on the property owned by the Fresno County Sheriff's Foundation. Each plaintiff will likely be paid out by Fresno County and PG&E, according to ABC30 legal analyst Tony Capozzi.

"I think this is going to be well beyond $650,000 -- there's no question about that," said Capozzi. "For someone to go through a major explosion like that, the emotional damages is going to be tremendous. The pain and suffering that he has gone through, although it may not be as much as others, but it's going to be a major factor in this case."

The inmates did report heroic efforts on the part of deputies after the explosions. They said they risked their own lives to pull the burn victims away from danger.

Neither PG&E nor the Fresno County Sheriff's Office would comment on this lawsuit Thursday.