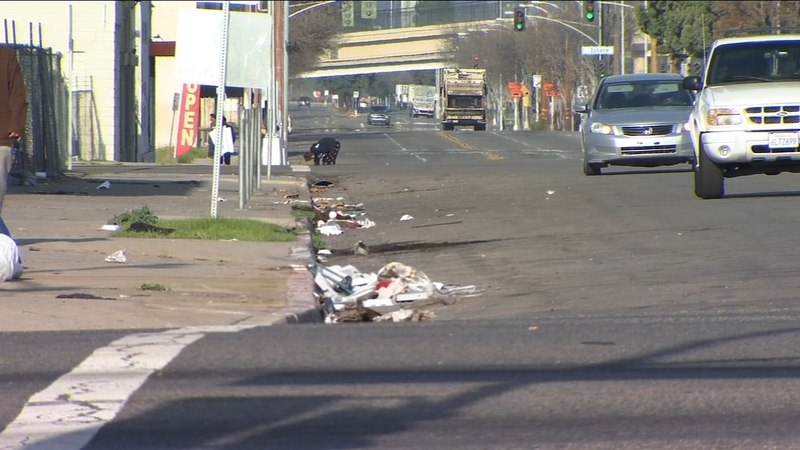 FRESNO, Calif. (KFSN) -- The garbage truck comes out to G Street and Ventura nearly every day, picking up an average of a ton of garbage.

But on this day after Christmas, the load is bigger than usual, partly because the homeless task force crews shoveling away the trash take off two days for the holiday.

"That combined with the fact that there are a lot of direct donations that happen on Christmas Eve and Christmas day," said Burke Farrah.

Police say the generous souls who come deliver holiday meals for the homeless often don't have any way to handle the trash they generate.

So, plates and food, and Styrofoam containers start to pile up.

But some of the homeless people say the task force was a little overzealous getting rid of the stuff they saw lining the fence between city and high speed rail property.

"This is all I have in the world. and all my baby books, my grandmother's ring. Everything, my medicine, everything," said Jan Campbell, a homeless resident.

Campbell says they took her tent and other valuables and wondered why they didn't follow the rule of storing things for 90 days instead of crushing them in a garbage truck.

Police say the homeless people know they're coming nearly every day and they know the routine.

They'll arrest known criminals, try to get everyone left behind into a program, and whoever chooses to stay has to move because of the city's "no camping" ordinance.

They say the daily cleanups help with public safety and sanitation -- so the homeless population isn't struggling with diseases like hepatitis -- but bringing food or cash directly to the people on the streets can be dangerous.

"If you do direct donations people horde that food and they don't have a safe place to store it. and food can go bad and people can get sick and ill. So, it's a complex issue and we know a lot of people felt led by the heart to do that direct donation, but they're not very effective and they can hurt the homeless population if they're trying to help,"