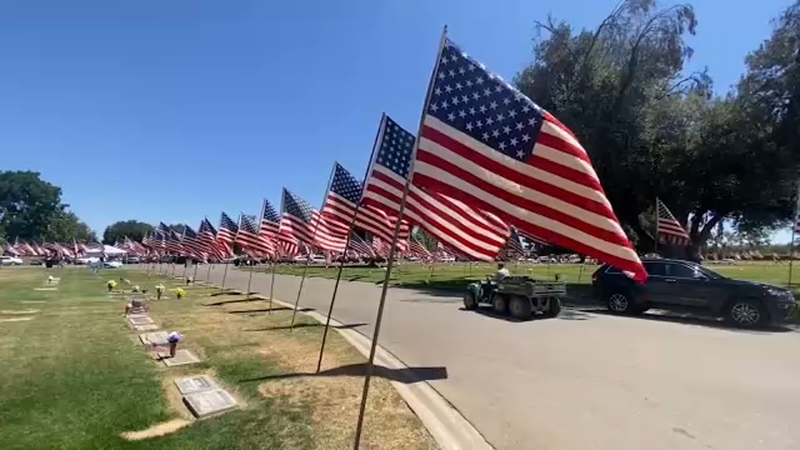 Each one, a sobering reminder of the military members who made the ultimate sacrifice for our freedom.

A rifle salute was held for the brave men and women who lost their lives defending our country.

More than 1,400 flags are on display at Fresno Memorial Gardens for military members who paid the ultimate sacrifice for our country. @ABC30 #MemorialDay pic.twitter.com/pQ9II3q3nN

Diane Durando laid a wreath alongside the Daughters of the Revolutionary War.

Her father and stepfather both served in the Navy and fought in World War II.

"We have our freedom, our right to talk, go where we please and these men and women gave that to us," said Durando.

Each one marked in memory of a military member who made the ultimate sacrifice.

Volunteers put them up and take them down each Memorial Day.

He served in the Army and fought in Vietnam.

He died last year, so this year, she attended the service in his place.

"Now that he's not here, I just feel like we need to honor him and just do whatever we can," Pacheco said.

A quartet gave a choral salute to each branch of the military and those who served were asked to stand during their respective anthem.

Congressman Jim Costa was in attendance and helped dedicate the avenue of flags to this year's honoree.

He also thanked those who sacrificed for our liberties and the families they left behind.

"When we talk about the sacrifices, the ultimate sacrifices that we honor today, we should never forget the families who were a part of that sacrifice," Costa said.

The flags were pulled down Monday afternoon.