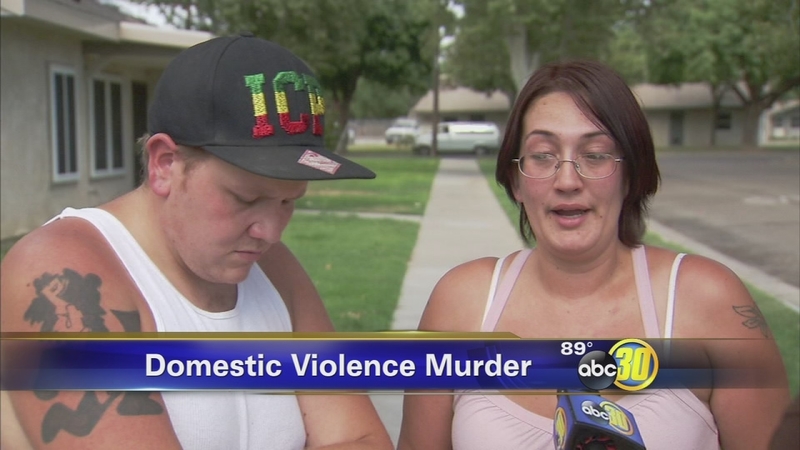 FRESNO, Calif. (KFSN) -- A Fresno mother and grandmother is the latest murder victim in the city. The suspect in her murder was shot and killed by police Monday. Now the victim's children warn about the dangers of escalating domestic violence.

The family spent Tuesday talking with detectives about the troubled relationship Cindy Raygoza, 45, had with her former boyfriend.

They say their mom's killer harassed and stalked their mother for nearly six months following a terrible break up.

A small memorial sits outside the Southwest Fresno apartment where Raygoza was stabbed to death. Her family says she was the victim of domestic abuse at the hands of her killer, her ex-boyfriend, Mike Reams.

"I'm mad, hurt, angered," said Raygoza's youngest son, Danny Rice. "This guy ruined the lives of so many people by his selfish decisions."

Rice and his sister Valerie Caldera say the couple broke up five months ago because of reams' abuse, which apparently never stopped.

"He would just mess with her," Caldera said. "He would bang on the windows or bang on the doors. She would tell him to leave and then he would walk away."

Reams has a history of violence against women going as far back as 1990. Action News discovered through court records Reams was convicted several times of assault with a deadly weapon and at least once for misdemeanor domestic violence.

"It's hard knowing the pain she went through, and there's nothing we could do about it," Caldera said.

There was nothing they, nor police could do to save Raygoza Monday. An officer shot and killed reams moments after responding to the scene of her murder.

Danny and Valerie hope to raise awareness now of how dangerous domestic abuse can be.

Victim advocates at the Marjaree Mason Center, a resource for domestic violence victims, say it's always a delicate issue. "They're so isolated and scared, that they don't know where to go," said Executive Director Genelle Taylor Kumpe.

The top is one that needs to be discussed. "They can't force them to get help," she added. "But they could tell them and let them know that they're there for them."

"So now we lost our mom because this guy just couldn't move on," Rice said.

The family says in addition to the pain of knowing this could have been prevented they say they will never get answers about why since both Reams and Raygoza are dead.
The family has set up a memorial fund.