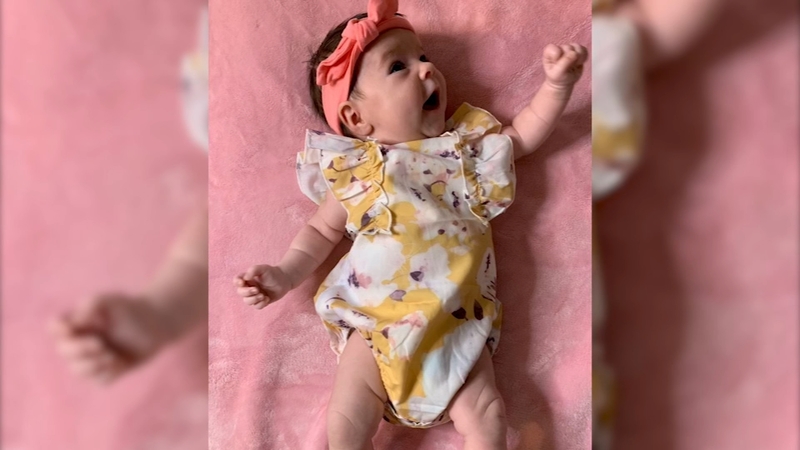 FRESNO, Calif. (KFSN) -- Photographs show the memories Michael Abrams and Jayden Rose should be making with their five-month-old daughter, Emalee.

They should be watching her take her first steps, and utter her first words, but instead, they're having to plan her funeral.

"You don't visit a hospital within five months for your same child. And then you definitely don't have to talk about either cremation or burial," Abrams said.

Rose says her baby seemed happy and healthy until she started vomiting a little more than a week ago.

She didn't think anything of it and put Emalee to bed.

A few days later, Emalee was vomiting again, and they took her to Community Regional Medical Center.

Rose says within hours, doctors told them that Emalee had a brain tumor and underwent surgery. She didn't respond to the efforts and is now brain dead.

"It could've been possible she had it while I was pregnant with her," she said. "We weren't expecting that. We thought she was going to be fine. We had no idea."

Through heartbreaking loss, the grieving parents took another hit: someone broke into their apartment.

To help, their friend, Alyssa Boyles, set up a crowdfunding page that's already raised thousands of dollars to help the parents during this time.

"What are we going to do if we do have to bury her, we don't have the expenses to do so. So they were stressing about that. And then having little items like going out of her house. And I didn't want to have to worry about it," Boyles said.

As they cherish their last moments with their daughter, Emalee parents say she'll be able to save others.

"The way that we're kind of processing it is that at least she's going to be able to save other parents from going through this," Abrams said.

Rose and Abrams are keeping the few memories they made with their baby close, treasuring every step and smile they shared with Emalee.