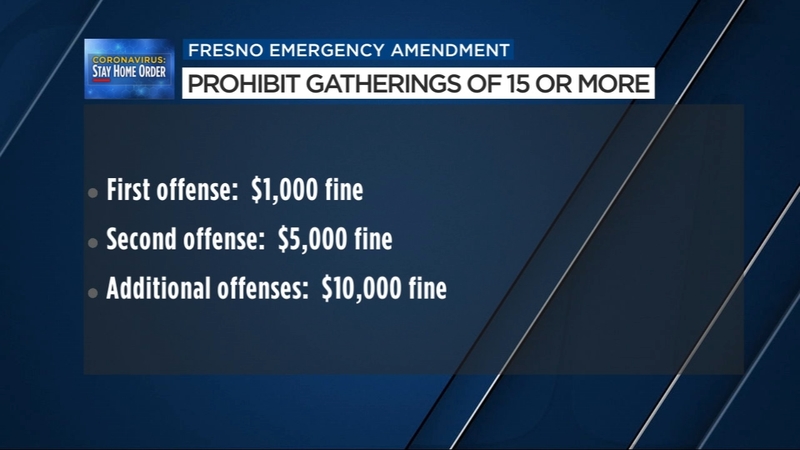 Fresno is considering a law against large gatherings, police say they won't enforce it

FRESNO, Calif. (KFSN) -- UPDATE: The Fresno City Council has voted to crack down on those in violation of state and local gathering restrictions in an effort to relieve the strain COVID-19 has had on local ICUs.

The item passed on Thursday afternoon in a 4-3 vote. The city reserves the right to fine residential mass gatherings, events, and concerts of more than 50 people.

The fines would be determined by code enforcement. The Fresno Police Department has said that it will not enforce the new order.

As the Fresno City Council prepares to vote on an ordinance that would prohibit gatherings of 15 people or more, the Fresno Police Department is already saying it won't enforce it.

The vote, which is expected to take place on Tuesday during a 4 pm special city council meeting, would introduce an emergency amendment to the Fresno Municipal Code that make gatherings of 15 or more people a fineable offense.

Under the proposed amendment, a $1,000 fine would be issued to the property owner for the first offense and would increase to $5,000 for the second offense and $10,000 for any offenses after that.

Chief Andy Hall released a statement on Monday, saying his department will not be enforcing the law if it is approved by the council and will instead focus their efforts on violent crime.

Chief Hall's entire statement can be read below:

"It has come to my attention, the Fresno City Council has announced a Special Meeting to be held on Tuesday, December 8, 2020 at 4:00 PM. Council President Miguel Arias has called this Special Meeting for the introduction and adoption of an emergency amendment to Section 2-514 of the Fresno Municipal Code to prohibit residential gatherings of 15 or more people.

I would like to remind everyone to be safe this holiday season and to use good judgment and common sense to ensure the safety of your families and our community."