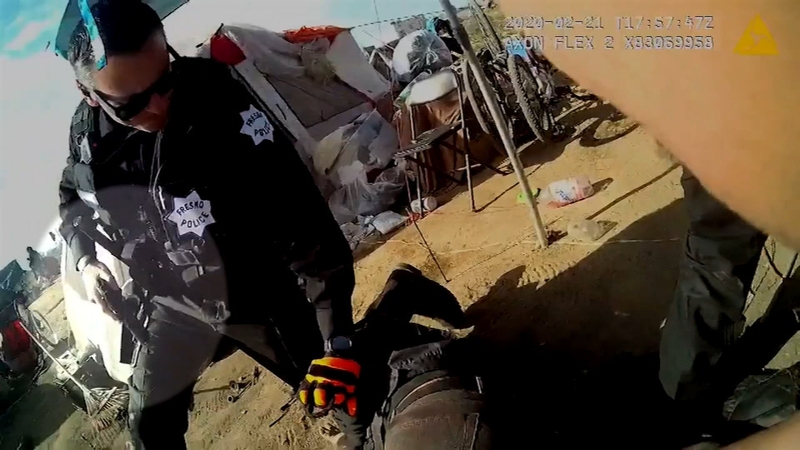 Lawsuit against Fresno police aims to change treatment of unhoused

Lewis Brown is the name on the lawsuit, but Brown's attorney is hoping the case has a positive effect on dozens of people living in the same camp and others across the city.

Fresno police body cameras recorded the arrest of Lewis Brown during a February 2020 sweep of a homeless encampment along Highway 180, west of Highway 99.

Prosecutors filed four charges against Brown, but they dismissed three counts before trial.

A jury found him not guilty of resisting arrest, the only remaining charge.

Brown left the courts unscathed, but he says his body suffered lasting damage.

"Messed my eye up and I'm just not young again," Brown said. "It hurt me pretty good."

Police reports claimed Brown "injured his face himself by rubbing it on the ground," according to a new federal lawsuit suing the city, the current chief of police, Paco Balderrama, and the two previous chiefs - Andy Hall and now-Mayor Jerry Dyer.

Kevin Little also argues in the lawsuit that the entire sweep of the camp was unconstitutional, and officers destroyed property without proper reason or notice.

He says it was just part of a "longstanding pattern and practice of mistreating and marginalizing (the city's) homeless population."

"Solving homelessness is a long-term goal, but the question is what do we do in the interim?" Little said. "Do we keep treating people like cattle and just moving them from one place to the next just because or do we respect their right to rest and their right to maintain their property. That's what the lawsuit's about."

The city and the police department chose not to comment on pending litigation.