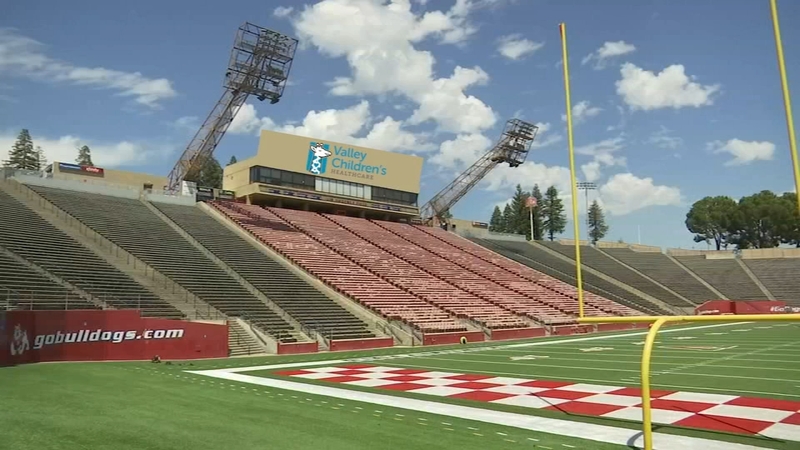 A $10 million sponsorship deal has given Valley Children's Healthcare naming rights to the stadium.

The money will be paid out over 10 years for scholarships, youth programs, and stadium enhancements.

Valley Children's deal came at a time Fresno State missed out on money from ticket sales and TV revenue because of the pandemic. Three sports were even eliminated.

Jimenez-Sandoval said, "It was been difficult but this really focuses and centers on the possibilities of how we can collaborate for the future."

The announcement was made at the campus library.

Former Bulldog quarterback David Carr joked, "I'm going to be honest with you. In my extensive study habits, it never led me to 3rd floor of the Henry Madden Library."

That's okay. David Carr and his brother, Derek, made it their mission to help Fresno State find a stadium corporate partner.

David said, "I know this would have hurt negotiations but this, for me, the union between Fresno State and Valley Children's was the only option for me."

He continued, "As you said, Valley Children's will be in there somewhere. That's as far as I can go today, Dale."

Suntrapak felt this was the perfect time for Valley Children's to expand its financial commitment to the school.

He said, "Literally for decades, we have been educating together. Any number of the health sciences students."

As many as 1,000 Fresno State students a year will take part in educational programs through Valley Children's.

Jimenez-Sandoval said, "It's meaningful in so many different ways. These are two iconic institutions that really further both the health and the education of our people, so I'm just thrilled that this happened."

Fresno State's football home is known as Jim Sweeney field at Bulldog Stadium. It opened in 1980 and was expanded in 1991.