National ranking 'an expectation' for Kalen DeBoer and Fresno State 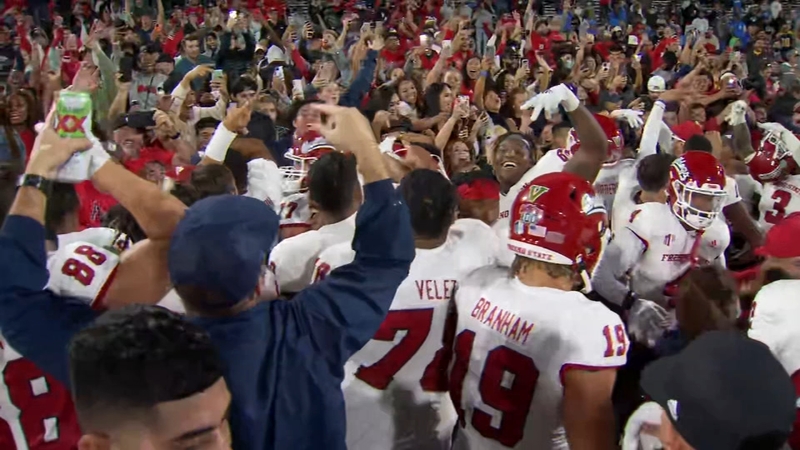 National ranking 'an expectation' for Kalen DeBoer and Fresno State

"It's an expectation, to be honest with you," DeBoer said Monday.

The game-winning drive against the Bruins, a result of practice makes perfect.

"Ironically, I think the situation we had in two minute drill this last week was 55 seconds," DeBoer said in his Sunday chat with Action News.

54 seconds on the clock, no problem for QB1. @CamWorrell says the game winning touchdown to @jcropper_5 was too easy for Haener. pic.twitter.com/BfTMk4z5Ga

"It (practice) does matter and it does pay off," offensive coordinator Ryan Grubb said Monday. "I don't think the guys flinched and I think even with 54 seconds, I don't think there was one of those eleven guys that went out there that didn't firmly believe we were going to win that football game."

Once again, no one on @CollegeGameDay picked @FresnoStateFB despite FS now winning FOUR straight against UCLA. @FresnoStateFB ranked #22 in the country & starts @MountainWest play Friday against UNLV! @ABC30 pic.twitter.com/2p1egxMOnh

"Not celebrating it for a little bit anyway," he said. "To me, it would be a shame just because the guys work too hard not to embrace it."

The challenge, especially in the age of social media, will be maintaining focus.

"It's a challenge for everybody because the alerts pop up on your phone and when there's 80 of them popping up every half a day, you can't help but take a look for half a second," said DeBoer.
"It's very simple," said defensive coordinator William Inge. "Earmuffs and blinders."

"I know his mom is in media so I said you need to slow down the theatrics," Grubb said. "You were alright. It wasn't that bad. You got up and Coach Hill even mentioned he saw him run over and chest bump guys after limping away. Taking nothing away, he lives for that. Take a shot get up and show guys 'I've got way more in the tank."

"No one sees him coming into meeting rooms," DeBoer said on Haener. "(He's) still in there at 9:30-10:00 at night like he has been and those are the things we got to challenge our team to make sure they continue doing."

As for Haener's nickname of 'The Natural' on the PAC-12 broadcast...

"Since the beginning of last year, I've called him 'the snake' just because it rhymes, right?" DeBoer said. "But I don't know if there's any big nicknames that the team has for him. I'm sure with the notoriety he's going to get some."