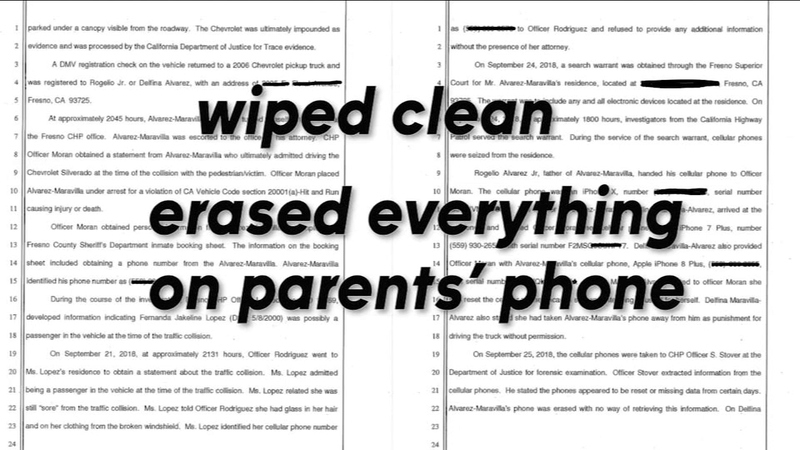 The newest warrant targeted Moises Guerrero, who's already charged as an accessory after the crime. But legal experts say it also implicates a few other people, including possibly the driver's parents.

The book is closed on the driver who hit Gladding, left him to die, and tried to erase any evidence of the Sept. 16 crash. Rogelio Alvarez-Maravilla is now serving a three-year sentence.

But Fernanda Lopez and Moises Guerrero still face charges of helping Alvarez cover it up.

Last month, Action News dug up evidence all three of them drove back to the scene twice within the first three hours.

CHP officers say they seized phones from Alvarez and both of his parents, but his phone was basically wiped clean and someone erased everything on the parents' phones from the Sept. 16 through Sept. 21.

The 18-year-old's mother told investigators she took her son's phone away as punishment for driving their truck without permission and she reset it so she could use it for herself.

Capozzi says that's strong circumstantial evidence they knew what was going on.

"It's the familial love," he said. "They're going to try to protect their children. But you have to be careful. You can only go so far. And if you overstep, you're going to get yourself in trouble along with your children."

CHP officers say Lopez also tried to delete her messages, but they recovered several of them -- revealing plans to play beer pong with Alvarez several hours before the crash as well as conversations with friends about the crash and the cover-up afterwards.

But Capozzi says knowledge of a crime isn't a crime, so investigators would need more evidence for prosecutors to file cases against anyone else.

"There's only so much you can do and it appears as though the DA has gone as far as they can go," he said.