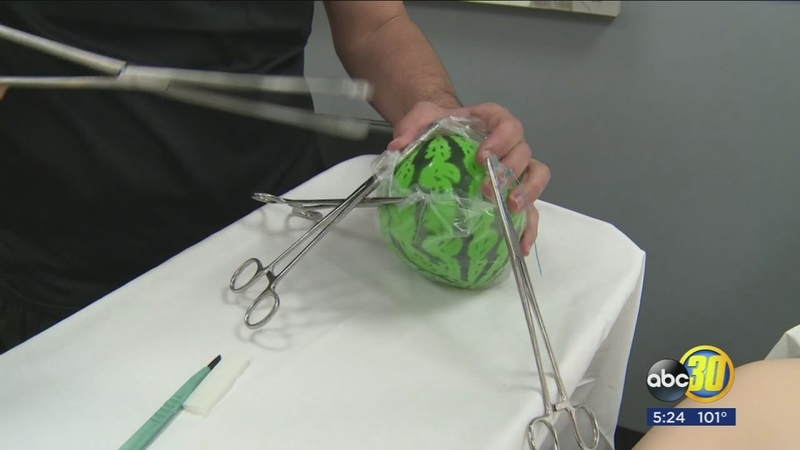 Fresno, Calif. (KFSN) -- PHOENIX, Ariz. (Ivanhoe Newswire) - A surgeon in Arizona removed a 17 centimeter ovarian tumor through an incision smaller than a dime. He used a controversial procedure called in bag morcellation, where the tumor is bagged while it's still inside the body. Then, it's broken up and removed. Morcellation has been criticized because of its potential for spreading cancer cells. This doctor believes he has all but eliminated the risk.

Kathryn Norris enjoys spoiling her dogs Diego and Leo. But a year ago, she had to have a six-by-five-centimeter ovarian tumor removed. Greg J. Marchand, MD, FACS, FICS, FACOG, SOEMIS, a minimally invasive gynecologic surgeon, told her he'd be using his version of in bag morcellation. He'd go in laparoscopically, break up the tumor and remove it with this device, minimizing the risk of spreading disease.

"It was very comforting to know that this procedure was going to hopefully contain everything so it would not be infiltrating other parts of my body," Norris told Ivanhoe.

Basically, Dr. Marchand cuts the tumor free, and bags it up.

"Mine is a technique that relies on bringing the mass up to the instruments, as opposed to going in after it with the instruments and using blunt instruments to make sure you don't rupture the bag in any way," Dr. Marchand explained. (Read Full Interview)

Dr. Marchand said, "Since this mouth of the bag is exteriorized, on the outside of the patient, there's really no danger of this tremendous mass getting around and falling back in."

This allows patients like Kathryn to go home the night of surgery.

Norris stated, "I was feeling really pretty darn good. I did not think that I would be able to leave that quickly."

"When I woke up from that procedure, I really felt strong. I felt ready to fight the cancer, and I really hope that that's the feeling I give my patients," Dr. Marchand said.

Kathryn Norris' tumor turned out to be cancerous, but she hasn't had to have any treatment other than regular blood tests looking for tumor markers.