Where COVID-19 has and hasn't spread since states reopened: Analysis 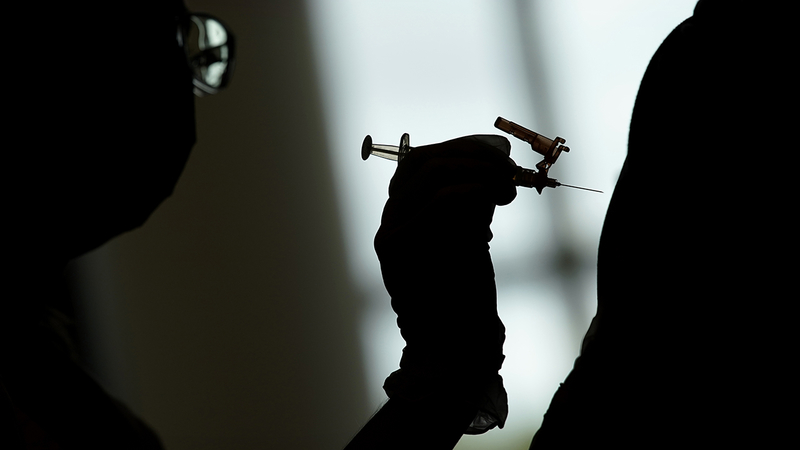 Bars, gyms and restaurants. Those were just a few settings health experts warned could become hotbeds for COVID-19 spread as states began reopening in the spring and summer of 2020 following the first and second waves of the coronavirus pandemic in the United States.

Yet, public data analyzed by ABC News appears to tell a different story. The data from states across the country suggests those shops and retail locations only accounted for a small percentage, if any, of new outbreaks after the pandemic's inital wave in 2020.

While experts believe that mitigation measures such as reduced capacity, gradual reopening and mask wearing contributed to keeping outbreak numbers low, they say more could have been done to push those numbers down further and make testing and tracing more robust.

The data is limited -- only a handful of states have released COVID-19 tracking information by setting or business sector upon reopening. And the traced cases only account for a tiny fraction of total cases in each state.

Based on ABC News' analysis of public data of all coronavirus cases in four states and D.C., the outbreak settings accounted for less than 5% of all COVID-19 cases in those states.

The U.S. is seeing record air travel for Mother's Day as vaccination clinics are expanding their outreach.

Experts who spoke with ABC News said contact tracing efforts around the country were very limited, representing only a fraction of reported new cases, as was testing at specific businesses and locations. This meant that smaller businesses and industries, particularly retail shops, couldn't identify all of the cases that spread at that one location, according to Dr. Jason Andrews, an associate professor in the Division of Infectious Diseases and Geographic Medicine at Stanford University's School of Medicine.

"At the beginning of the epidemic of February and March last year, several people would be called in and you had really good contact tracing, but during really big outbreaks, states just don't have the resources to track every case," he told ABC News.

The COVID outbreak in the U.S. quickly ballooned from a handful of cases with international travel contacts of known origin to uncontrolled community spread. Complicating matters were delays and limits on testing.

One expert who spoke with ABC News called states' attempts to collect data on where new COVID cases were happening upon reopening as "half measures" and that more robust data collection may have helped bring the number of new cases down further than they currently are, even amid mass vaccinations.

States that publicly released data about outbreaks since reopening included Arkansas, California, Colorado, Delaware, Illinois, Kansas, Louisiana, Michigan, North Carolina and the District of Columbia. Their data helped provide some insight into where COVID-19 did and didn't spread during the initial reopening of 2020.

For instance, in California and North Carolina, outbreaks were noted in a variety of settings including in bars, gyms, restaurants, manufacturing, retail and health care facilities since each state began some form of reopening -- January 2021 for California and late May 2020 for North Carolina, based on the data collected.

The data may provide insight into the public health response to the early part of the pandemic, pinpoint where the virus did and did not spread, and may serve as a guide for the future, health experts argue.

Here is what they say can be learned from the data just a few states collected about where new COVID outbreaks happened as they strived to reopen and regain a semblance of normalcy. 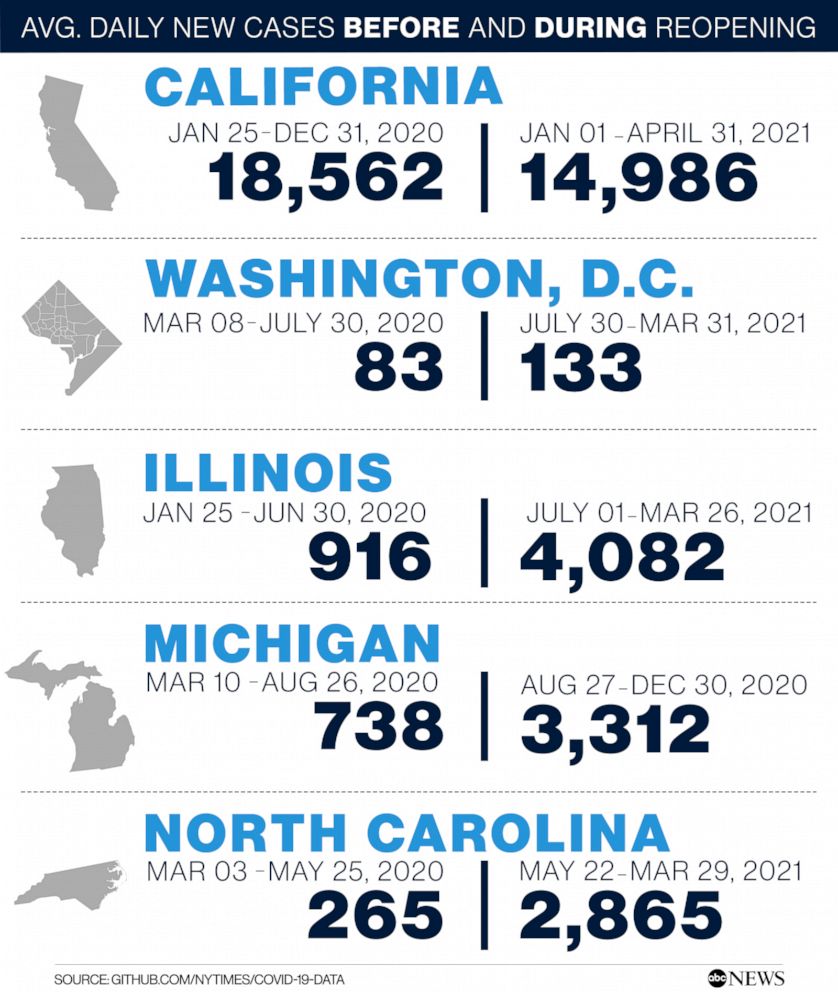 Where outbreaks were reported

ABC News pulled public data on reported outbreaks from the health departments of California, Illinois, North Carolina, Michigan and the District of Columbia, which were able to provide data on specific outbreak locations. The data set included dates following the states' reopening their businesses, schools and other services after the first COVID-19 wave in the spring of 2020.

Each location saw different results when it came to its case numbers following those reopenings.

Since wider reopening beginning May 22, 2020, North Carolina had a 981% increase in the average number of new cases since the beginning of the pandemic.

In Illinois, the average number of new cases jumped by 345% compared to the beginning of the pandemic, beginning July 1, 2020, the health data showed.

Following its wide reopening, July 21, 2020, D.C. had a 60% uptake in the average number of new cases since the beginning of the pandemic.

Michigan had a 349% increase in the average number of new cases since the beginning of the pandemic starting in Aug 27, 2020.

When looking at the specifics of the data, some health departments reported a higher load of cases in more settings than others.

Health care and "social assistance" settings -- including doctor offices, dentists, rehab facilities and shelters to assist homeless people -- made up over 2% of California's new COVID-19 cases since reopening as of January 2021, according to the state's data.

And in North Carolina, religious gatherings accounted for 2,406 cases, the highest number of new COVID-19 cases by reported outbreak setting since it reopened as of May 2020.

As COVID restrictions begin to ease across the region, medical experts say some are starting to deal with "re-entry anxiety."

Manufacturing and food processing centers appeared to have been among locations with some of the biggest outbreak numbers since states reopened, the data showed.

When looking at the specifics of the data, some health departments reported a higher load of cases in more settings than others.

Health care and "social assistance" settings -- including doctor offices, dentists, rehab facilities and shelters to assist homeless people -- made up over 2% of California's new COVID-19 cases since reopening as of January 2021, according to the state's data.

And in North Carolina, religious gatherings accounted for 2,406 cases, the highest number of new COVID-19 cases by reported outbreak setting since it reopened as of May 2020.

Manufacturing and food processing centers appeared to have been among locations with some of the biggest outbreak numbers since states reopened, the data showed.

"What happened here is we label people as essential but don't give them the resources that they need," Scarpino told ABC News.

When it came to nonessential businesses, the data from the states' health departments showed far lower outbreaks, following reopening. Michigan was the only state to record over 1,000 cases related to a bar or restaurant, with 1,100 incidents recorded after Aug. 27.

After Washington reopened its economy in July, it reported 311 COVID-19 cases related to restaurants and bars, according to health data. In North Carolina, 327 cases were linked to eateries and bars after the state reopened on May 22, the health data showed. 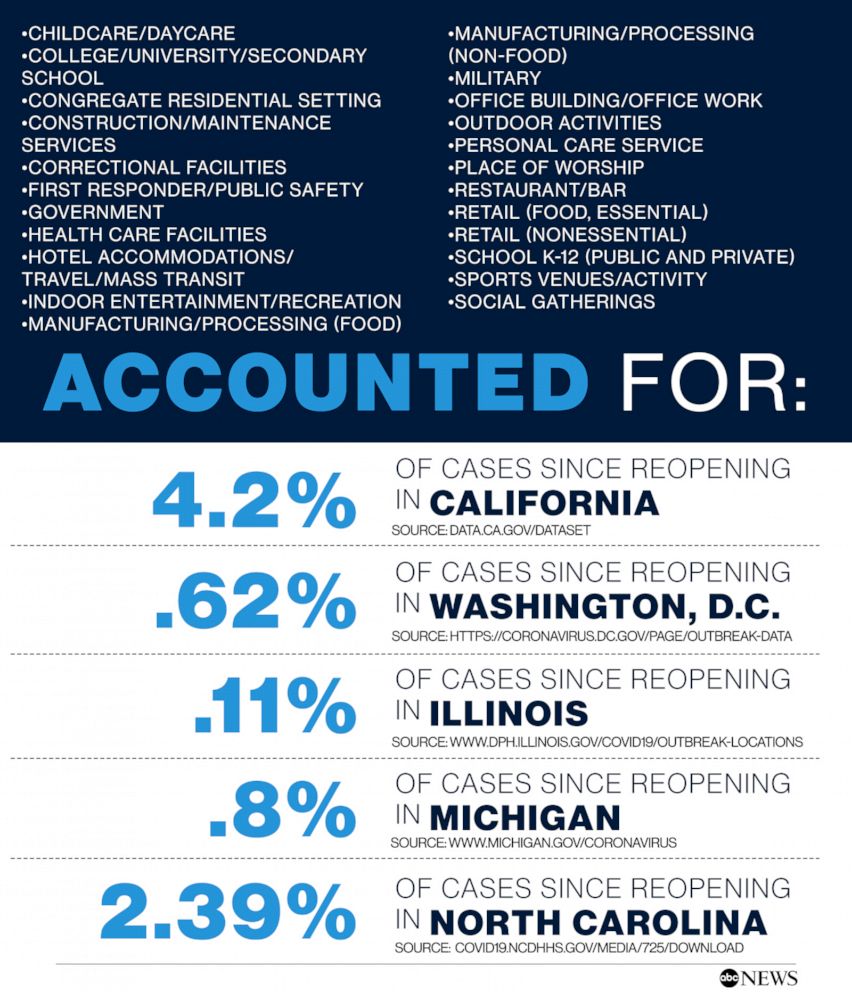 While health experts say the data indicates that calculated restrictions on businesses helped prevent wider spread of the disease and the numbers may not show a complete story, Andrews, the professor at Stanford Medical, said the outbreak data tracks with what researchers know about the state of testing.

Sectors reporting the most outbreaks, including factories and schools, had more robust testing practices for their members and were able to accurately show where cases originated and spread.

Smaller businesses did not have the capability or time to have that detailed of a report on their cases, according to Andrews.

In fact, Andrews and other experts noted that the public health data on outbreaks represents a fraction of the cases throughout the states because of tracking challenges.

Dr. John Brownstein, an epidemiologist at Boston Children's Hospital and an ABC News contributor, said most COVID-19 cases took place during the first and second waves outside of workplaces and indoor businesses, making it hard to quantify their origins.

For example, a Centers for Disease Control and Prevention report found that COVID-19 cases involving a school in Illinois were tracked back to a bar opening.

"You have transmission in these settings that then gets back into the community," Scarpino said.

Nonetheless, Scarpino said the limited data that has been collected is beneficial for planning how to address the next phase of the pandemic and future health crises.

Even with limited data and tracking, health experts said the controlled reopening of indoor businesses was effective at slowing cases following the first wave.

Decreased capacity and extra distance at gyms, schools and restaurants helped mitigate the spread of the virus outside of households, according to Scarpino.

"There are plenty of examples of employees wearing masks, it keeps them safe, it keeps clients safe. The things we did had an impact," he said.

Scarpino said that some of the policies could have been fine-tuned to decrease numbers even more. For instance, over 1,000 cases were reported in K-12 schools in Kansas, Michigan and North Carolina, after the states reopened in the end of May 2020, according to the public health data.

North Carolina had 3,639 cases in college settings after its reopening, the state data showed.

"It's also possible that if schools were opened back in the summer... we may not have had as many cases," Scarpino said. "The indoor setting really increased transmission during the fall and winter."

He also reiterated that health protocols should have been stricter in the factories, manufacturing plants and other indoor businesses.

"It's clear the measures did help, but we were stuck at these half measures that have kept us at this misery," he said.

How the data can shape future public health decisions

Andrews said that outbreak data can give officials a more strategic battle plan on vaccination efforts and keep cases down.

In particular, increasing vaccine administration in the locations that have seen outbreaks could help prevent future COVID-19 spread, he said.

Vaccinations among people who work in factories is crucial as is vaccinating inmates and staff at jails and prisons, Andrews said.

"Those locations are going to continue to be high risk until you increase the number of vaccinations," he said.

From the state data pulled by ABC News, correctional facilities accounted for nearly 0% of new cases since reopening. Those states seem to have grasped the importance of preventative measures and vaccinations among inmates and corrections staff early on in the pandemic.

But for other settings, Scarpino recommended the U.S. enact a similar response to Israel, which brought the vaccines directly to people at several locations.

"Let's literally go to the bars, go to the boardwalks and get people vaccinated," he said.

In the meantime, the government needs to take a hard look at their public health offices and boost resources needed to collect more detailed data on disease outbreaks, Scarpino said.

While Scarpino said some states' health agencies took extra steps to track and trace cases to specific locations, overall, agencies were undermanned and underfunded to get accurate counts.

That tracked data is the first step to containing any future coronavirus outbreak or future contagion, he said.

"We need that investment and to be prepared," Scarpino said. "Something like this will happen again in our lifetimes. We now have the power to put the systems into place to prevent the spillover to become a pandemic."

ABC News' Mark Nichols, Luis Yordan and Martin Karlin, a former economist for the U.S. Department of Labor, contributed to this report.