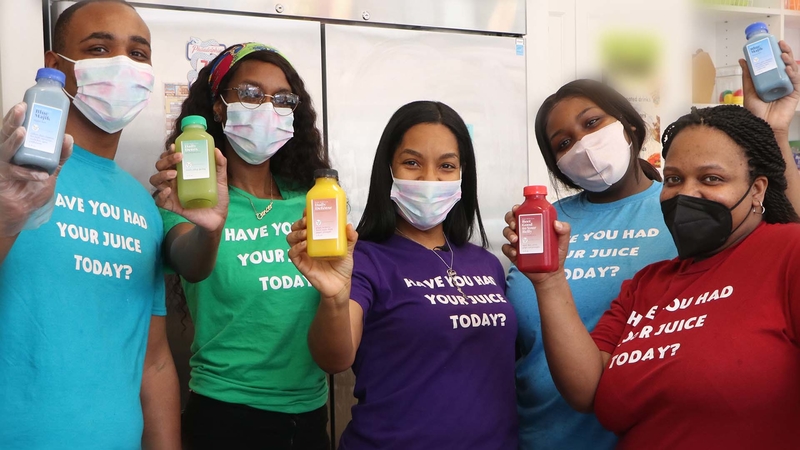 "Made with Love Juicery" inspired by mom's weight-loss journey

PHILADELPHIA -- "Everything I do is from the heart and with love," said Latoya Brown. "It's truly a labor of love."

That was the inspiration for the name of her small business, "Made With Love Juicery," which first opened its doors in May 2021 in the city's Spring Garden neighborhood.

Brown has been both a pharmacy and culinary arts student. It was her time working at Whole Foods when she was first introduced to the world of juices.

"I gained 100 pounds during my pregnancy," she said. "And I found juicing as a way to not only lose weight but to boost immunity."

When the juice bar closed at Whole Foods, she started crafting her own brand to sell out of her car. Her desire to share healthy recipes with the whole community led to opening her very own storefront.

But there were some challenges she needed to overcome first.

"Five days before opening, the window was broken," she said. "Our refrigerator also blew out and the neighborhood chipped in and donated and we were able to get a brand-new refrigerator."

Brown says the community and her employees have kept her pressing on despite the ups and downs. But at the end of the day, the biggest reason she works hard is to provide for her children.

"I am a wife and the mother of three rambunctious kiddos," she said. "Everything that I do is for them. I don't think I would be where I am today without the kids."

Brown hopes that her work ethic will serve as an example to her kids and the community. She works seemingly endless hours and currently takes the same salary as her employees.

"That's all I can afford right now," she said, "And I feel like my team is doing the exact same thing as me, so, I don't want to take anything more from them."

Her employees seem to think highly of her as a result.

"It's very inspiring, especially her being a mother of three," said employee Shawna Walker.

Being a mother herself, Walker hopes to emulate Brown's career trajectory.

"One day, I want to own my own business," she said. "So, I've been trying to figure out how she does this and that. And I'm just glad that she stayed strong through everything."

As for the future, Brown hopes to see her juices hit the shelves of stores like ShopRite that are contained within Philadelphia's neighborhoods. That way, folks won't have to venture far from home to find healthy options.