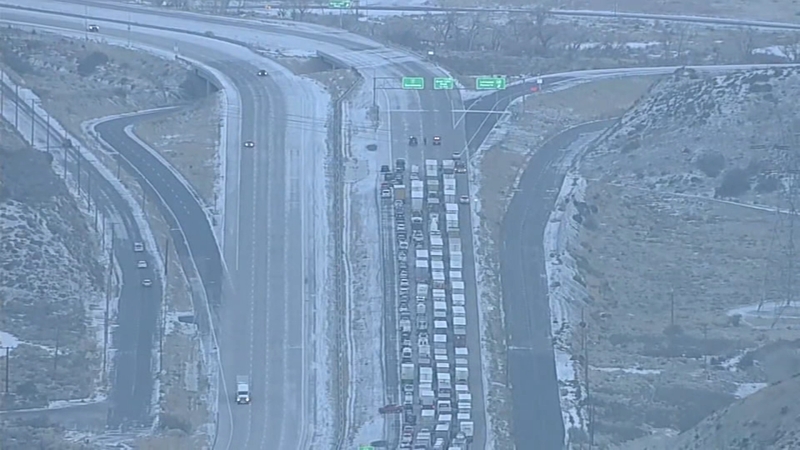 I-5 5 reopened through the Grapevine following hours-long shutdown

A winter storm brought snow and ice, forcing the California Highway Patrol to shut down the road until conditions improved.

The Shell Gas Station on Grapevine Rd., just off I-5, said they were extremely busy.

"It started about 6 am when they shut down the Grapevine and it was just chaos after that," said cashier Mark Novin.

Dozens of people pulled off of I-5 and visited the gas station while waiting to get back on the road and head down to Southern California.

Workers there were also on longer shifts because other employees were stuck in traffic.

While traffic was stopped along I-5, those headed to Los Angeles from the coast were dealing with their own set of problems along Mil Potrero Highway.

"At first it was beautiful, there was snow in the mountains, like a light layer, and then it started getting heavier and heavier the further I got into and I started sliding around a bit," said Miranda Delgado.

She got stuck in the snow near Pine Mountain Club and had to wait for a tow truck to get her out.

"It was a tough day, it was definitely a roller coaster," Delgado said.

And she wasn't the only driver who was stranded on the back road. The California Highway Patrol said at least a dozen vehicles were stuck.

While officials worked to get cars cleared out on Mil Potrero Highway, they also worked to keep traffic controlled.

Once the sun came out and helped melt the ice on the Grapevine, officers were able to reopen I-5.

Traffic is moving steadily southbound on I-5 over the Grapevine, despite more winter weather. @ABC30 pic.twitter.com/jXUuOZcg9Z

Passing storm cells brought more snow and reduced visibility, but thankfully, it wasn't enough to shut down the road again.

"As long as we can keep traffic going, that'll hopefully keep the roadway warm. Because, as cars travel up and over the roadway, it keeps things warmed up and hopefully keeps the ice away," said California Highway Patrol Officer DC Williams.

Officials remind drivers anytime there's rain or snow, you should increase your following distance and slow down.