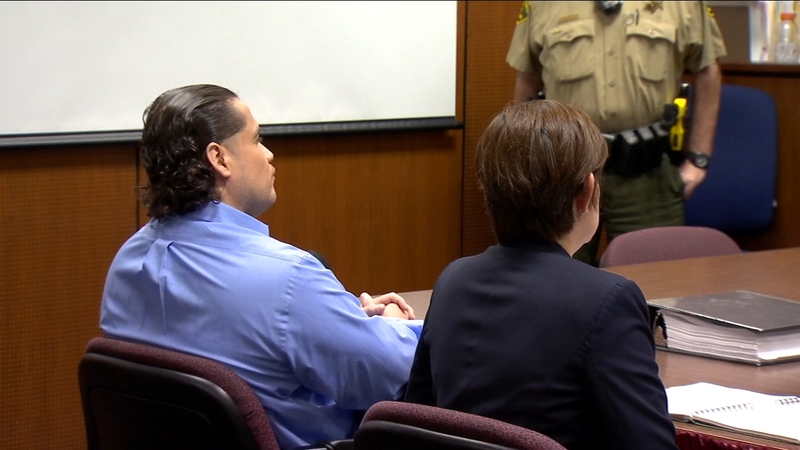 FRESNO, Calif. (KFSN) -- An outburst from a murder defendant put his trial in a Fresno courtroom on hold for the moment, but Joel Valera could find himself convicted as soon as Thursday.

Valera has tried a couple of times to dump his attorney, using some very specific legal terminology to say he's not getting "sufficient counsel."

The judge has denied his requests, and his frustration bubbled over Wednesday, so he got kicked out of court, while his attorney kept trying to improve his chances.

As Joel Valera's murder trial neared its end, his decision whether to testify was all that was left.

The answer wouldn't come easily, but it came loudly.

"Do you wish to place anything else on the record, Ms. Pincus, before the jury is brought out?" Judge Houry Sanderson asked Valera's public defender after she said Valera wouldn't tell her whether he wanted to testify.

At that point, Valera smacked his hand hard against the desk in front of him.

"If I am not going to be given the right to testify or say anything then I don't want to be here," he said.

"Mr. Valera, you are being given the right," Judge Sanderson said.

"I want to..." Valera shouted before the judge cut him off.

"I want to testify," Valera said.

"I do, but I don't want her as my attorney," Valera said.

Valera killed Artie Gomez four years ago, shooting his next-door neighbor as Gomez and his teenage sons and nephews prepared for a camping trip.

His attorney laid a self-defense argument for him, but with time running out in the trial, and without the jury in court, Valera shouted about his attorney and said he'd keep it up in front of jurors too.

"It is not to your advantage, Mr. Valera, to have these kind of outbursts," Judge Sanderson told him.

"I do not care," Valera said. "It is to my advantage to be provided, sufficient counsel."

"You have stated that several times and I have made my ruling," the judge said.

"Based on what?" Valera said

"The record will speak for itself," said Judge Sanderson, referring to her previous rulings that Pincus was providing Valera the best defense possible.

"Based on what?" Valera said.

She eventually removed Valera from the courtroom for repeated disruptions, in the morning and again in the afternoon, but his attorney kept working to present evidence to reduce any conviction from murder to manslaughter.

"They would come in to show his perceptions, and that goes towards imperfect self-defense," she said of videotaped statements Valera made to police.

Legal analysts tell Action News it sounds like he's making an amateur and probably fruitless attempt to set up an appeal after a conviction.

They'll try to bring him back to court Thursday morning for closing arguments in the trial.

Murder defendant Joel Valera has tried to delay the end of his trial a couple ways. He refused to wear civilian clothes to court again this morning.
He now says it’s because the two sets loaned to him by the public defender are dirty.
So, a change of clothes is coming. @ABC30 pic.twitter.com/Fd0p0hwDBj

Valera, in fresh clothes, loudly pounded on the desk in front of him as the judge and attorneys discussed with him whether he would testify.
He’s cuffed now, says he’ll have another outburst when the jury comes back because he wants to testify, but doesn’t want this attorney. pic.twitter.com/DcvlEZRbZA

Trial will move forward without Valera’s presence.
This is rare, but it happens.
Last time I can remember seeing it was in the Spencer Scarber rape trial when a judge decided (100% correctly, as it turned out) that Scarber had disappeared voluntarily.

With an empty seat to her left, public defender Marina Pincus is still working hard for her client. She’s trying to get some hearsay allowed into evidence now from a Valera police interview so she can build an imperfect self-defense argument. pic.twitter.com/vn1mAU17w9

Without the hearsay interview and without Valera’s testimony, the defense rests.
Prosecution has no rebuttal.
Closing arguments will be tomorrow.
The judge will give Valera another chance to be present without outbursts.

And once again, he’s gone.
Joel Valera’s “disruptive behavior has carried on”, says Judge Sanderson, so deputies removed him from court for jury instructions. pic.twitter.com/7QogxWbDrR