The Madera native spends his days taking care of bees while they pollinate important crops.
KFSN
By Amanda Venegas 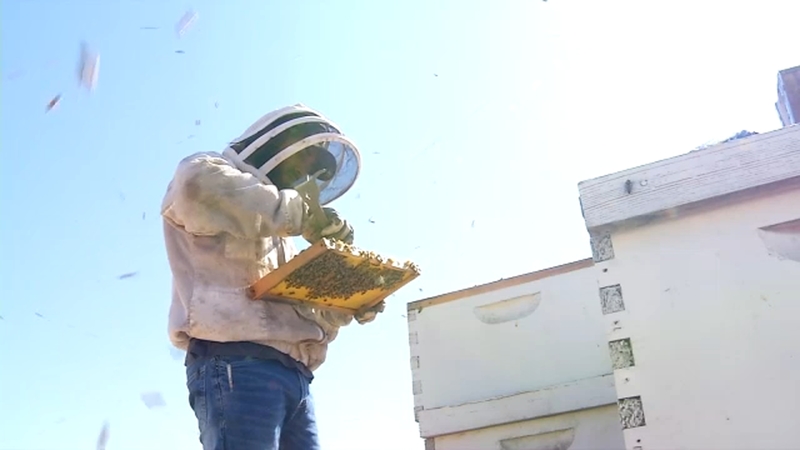 MADERA, Calif. (KFSN) -- The sounds of bees are soothing to veteran Jesus Toro.

"The first time I opened my hives, I think I was hooked. I knew I was going to be a beekeeper for the long run," said Jesus Toro of Toro Apiaries.

The Madera native spends his days taking care of bees while they pollinate important crops. His father worked the fields, and even Toro spent time working there.

"When I was in high school, I picked tomatoes during the summer, fresh market tomatoes, so I could buy my school shoes. My dad thought it would be a good lesson to teach us the value of hard work," Toro said.

After high school, Toro served in the US Marines. He was a helicopter mechanic and spent more than four years in service at Camp Pendleton.

"I think that transition from the military to civilian life is a very difficult one. I decided to go to school because around that time, my daughter was born, and I wanted to be able to provide her with a better life," Toro said.

Toro graduated from Fresno State with a plant science degree. He picked up beekeeping and thought it was a career he could pursue.

Recently, he got some help from the Farmer Veteran Coalition and received a grant for a trailer that is helping him transport bees.

The people that were working with have served our country once, and they are looking for continued service and the transition to civilian life, and we also in the United States have an aging farmer population," said Rachel Petitt, program director for Farmer Veteran Coalition Program Director.

This past year, 100 veteran farmers have been given grants to help their businesses.

Toro says he's learned tough lessons so far. However, he said perseverance and grit, the same qualities that helped him in the service, are helping him find a fruitful career in agriculture.

"My dream is to get to close to a thousand hives at least. One thousand would be the goal. Have some bees here in the Central Valley. I also want to have some land in Oregon. That way, I can take my bees there in the summer," Toro said.

A passion that started in the fields and is growing in the Valley and beyond.