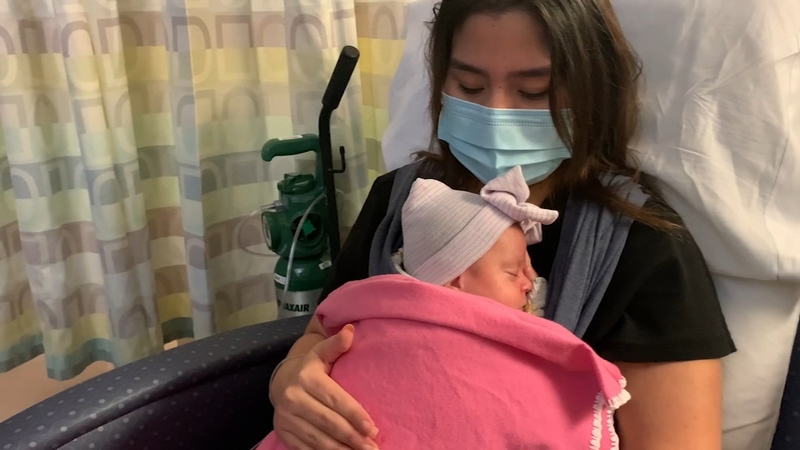 FRESNO, Calif. (KFSN) -- This is the day 25-year-old Gabriela Manoz has been dreaming of for the last two months. After fighting a fierce battle against the Coronavirus, she's finally going home to Madera.

"I feel like we have talked about this forever and it is finally here," she said.

But she's leaving with more than just a story of survival.

Inside Community Regional Medical Center she found unconditional love, when she laid her eyes on her baby girl, Madalyn Rose.

"My love and my motivation is for her," she said. "Now I'm just focused on her."

This moment was never guaranteed for Manoz, but the thought of it helped her push through the darkest of times.

She was about 30 weeks pregnant and diabetic when COVID-19 ravaged her body and almost took her life.

"A doctor sat me down and he said, I want to prepare you for this before you go in there," said her mom Tracy Ornelas. "I was thinking, 'What's going on?' And then he said, 'There is nothing I could do for your daughter.'"

But they refused to give up. Doctors said they would keep fighting for Manoz as long as they could.

As her condition worsened, doctors had to deliver her baby via an emergency C-Section.

"I was more scared for my baby other than myself, because what if something happens to her," said Manoz. "At that moment, I didn't know what was going to happen."

Manoz's chances of survival dropped to 10%. At one point, she was unresponsive for 45 minutes.

To keep her alive, they started a treatment called ECMO.

"Which are huge tubes that divert 80% of your blood out of the body to load it with oxygen and inject it back," said Doctor Eyad Elmasri.

Slowly, she started improving and her lungs started to recover. Still, she couldn't talk or even write, but she needed a name for baby girl.

Her family started coming up with names and Manoz would shake her head yes or no.

"I love the name now," said Manoz. "At first, I was going to wait until she was born to name her, but it goes with her."

Nearly a month later, she was taken of ECMO and met her little Madalyn for the first time.

"It took a month for me to finally get to see here and when I saw her, I couldn't believe she was here," said Manoz.