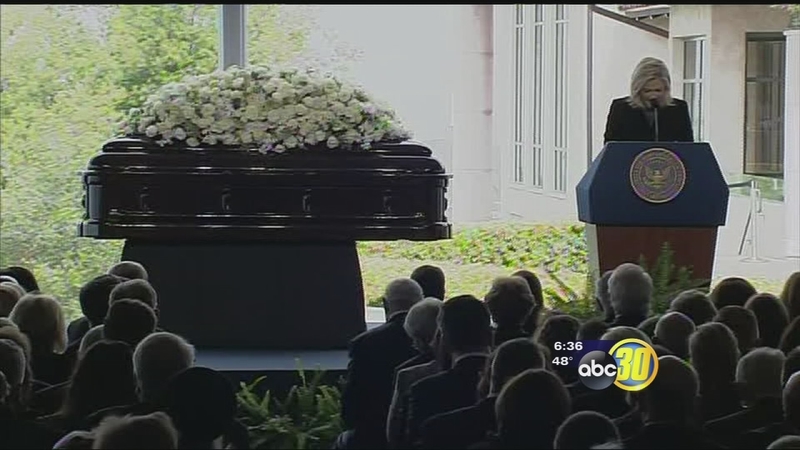 SIMI VALLEY, Calif. (KFSN) -- It was a day of remembrance Friday in southern California as hundreds gathered to honor the life of former First Lady Nancy Reagan.

Funeral services for Nancy Reagan were held at the Reagan Library in Simi Valley. A thousand guests including celebrities, political figures, family and friends gathered to honor the former first lady.

Former Canadian Prime Minister Brian Mulroney, a close friend of the Reagan's, read a letter President Reagan had written to Nancy in which he wrote about the many things he loved about her.

"She is a wonderful person to ride with, to sit by the fire with, just to be with," Mulroney read.

Media figures, ABC's Dianne Sawyer, and NBC's Tom Brokaw spoke about their relationship with Nancy. Her daughter Patti Davis spoke of the often troubled relationship she had with her mother but said those memories have taken a back seat to better times.

"There were moments in our history when all that went between us was love," Davis said.

Nancy's son Ronald Prescott Reagan reminded the crowd this was not a time of mourning. "She did love a party," he said. "And she would want this to be a party, this is not a tragedy, it is a celebration."