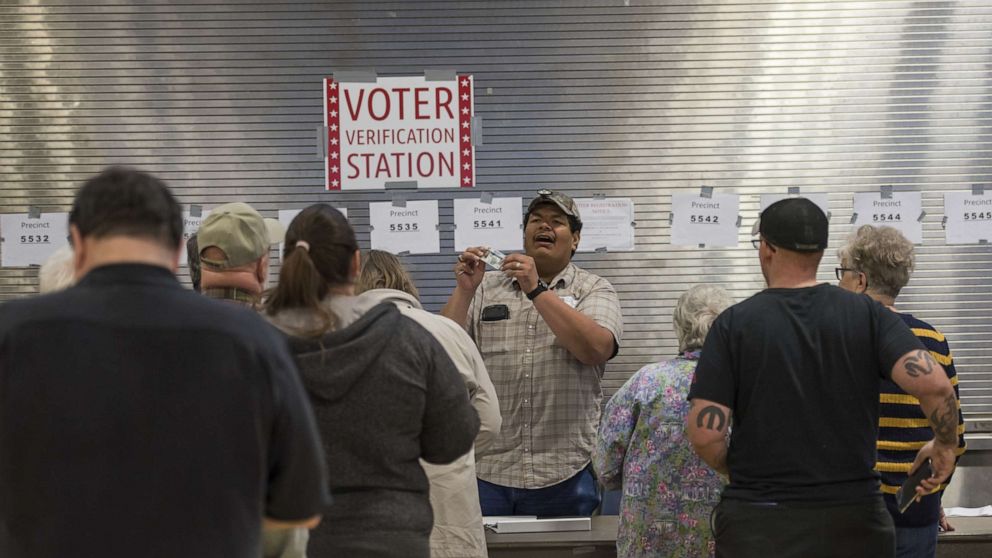 ABCNews
By KENDALL KARSON
The Nevada Democratic caucuses, the third nominating contest of the cycle, are just over a week away and in an effort to avoid the same fate as Iowa, the state's Democratic Party revamped their reporting strategy to ensure what they hope will be an infallible process on caucus day.

Among the key changes that the Nevada Democratic Party is implementing post-Iowa is a "caucus calculator," which will assist precinct chairs "in completing caucus math as well as incorporate early vote data," according to a new memo that details the updated caucus reporting process sent to the presidential campaigns early Thursday and obtained by ABC News.

With the integrity of the Iowa results coming into question, and the state party still reviewing the accuracy of their results, in part due to a complicated math formula for calculating state delegates, Nevada's calculator seeks to allay concerns over reporting.

The calculator will have a built-in caucus math formula to calculate totals for the precinct chairs, by combining the caucus day data with the early vote data. Nevada is the only early state with early voting.

The party says that it has consulted with the Democratic National Committee, the Department of Homeland Security and "independent security and technical experts" regarding this new calculator. The party is also consulting "experts at Google" so they are aware that the party is using its program and to ensure the security of the tool. Outgoing Iowa Democratic Party Chairman Troy Price cited a "coding issue" as the fatal flaw with their reporting app, which was developed by the vendor, Shadow Inc.

As part of an effort to avert Iowa's embarrassing stumbles, which culminated in Price announcing Wednesday he will resign from his post, Nevada Democratic Party William McCurdy II announced a day after the Iowa caucuses that the party "will not be employing the same app or vendor used in the Iowa caucus."

Up until this point, the state party was far more reticent to give any specific details on their new reporting process.

"We're in the process of testing those different options and seeing which one would be the best path for us," a Nevada Democratic Party official told ABC News earlier this week, without offering particulars on the options they were exploring. The official added that the party has "shied away from talking about what the different backup mechanisms are" because there has been "a lot of misinformation" trickling out.

Amid the uncertainty over a clear path forward, some local Nevada Democrats, who were warned against using the term "app" to describe a new reporting tool, relayed anxieties over the impending caucuses in interviews with ABC News.

"We have been banned from using the 'app' word, but nobody has told us what a tool is exactly what or how we'll do it," Seth Morrison, a first time caucus site leader at Legacy High School in Las Vegas, told ABC News earlier this week, before the memo was released. "And nobody has told us the difference between the two."

But the state party, under far more scrutiny after Iowa, is actively working to put in place a number of redundancies for caucus day.

"We've been working around the clock here just making sure that what happened in Iowa doesn't happen in Nevada," the party official said. "That's obviously something we are very confident in."

Their multi-step reporting process includes "a two-source verification process where data will first be reported" through "a secure hotline to a trained operator" and one other additional source, either the calculator or the reporting sheet. The party will have a public-facing voter protection hotline number; a secure, dedicated hotline for precinct chairs which will be made available only to them on caucus day; and an internal hotline for non-reporting related issues, according to a Nevada Democratic Party official.