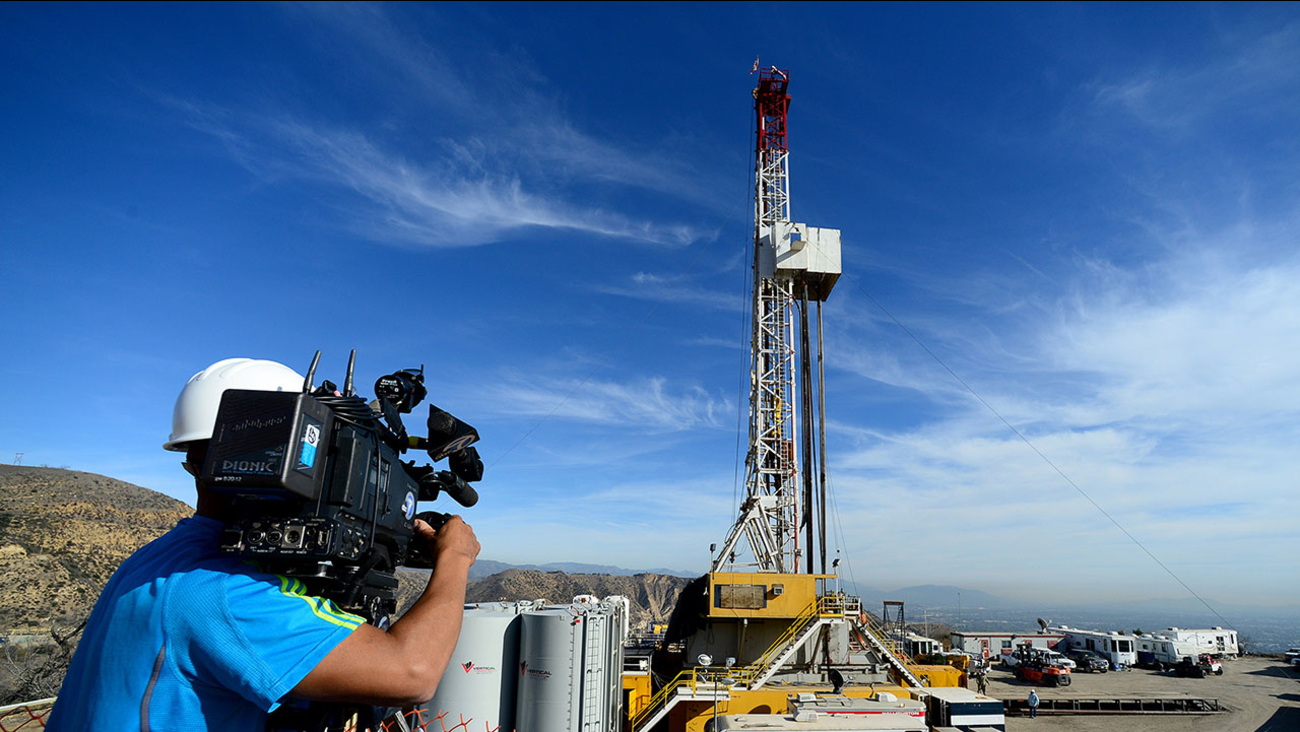 Crews from SoCalGas and outside experts work on a relief well above the Porter Ranch area of Los Angeles (Dean Musgrove/Los Angeles Daily News via AP, Pool)

LOS ANGELES -- Southern California Gas Co. has been ordered to detail its plans to stop a six-week-old well leak blamed for sickening hundreds of neighbors by spewing huge amounts of methane into the air, state regulators said Thursday.

The Division of Oil, Gas, and Geothermal Resources expanded an emergency order it issued in November. The utility now must provide a detailed schedule for work on drilling a relief well to stop the leak, which is deep underground near the San Fernando Valley community of Porter Ranch.

The utility also was told to "expeditiously and aggressively pursue options" for capturing the methane while the well is drilled.

On Wednesday, the Federal Aviation Administration issued an order banning aircraft from flying over the leak below 2,000 feet because it might be hazardous. The ban covers about a half-mile radius and will run through March 8. The ban doesn't cover Los Angeles County Fire Department aircraft.

The state's oil and gas division has been overseeing operations at the well site since the leak was discovered on Oct. 23. The division also announced Thursday that it plans to bring in a group of scientists from three national laboratories to help monitor the efforts and look at data supplied by the gas company.

"We are leaving no stone unturned," said Steve Bohlen, the state's outgoing oil and gas supervisor.

"This is not a simple leak at all" and standard industry techniques for "killing" the well such as pouring in mud already have failed, he said in a conference call.

The leak is in an inner casing 500 feet underground and the gas is escaping into the ground at the bottom of the well, roughly 1,000 feet below, Bohlen said.

The division has directed Southern California Gas to drill at least one well that will intersect the leak far below the surface. Pressurized fluids can then be pumped in to quench the leak, Bohlen said.

The utility has said the work has begun but will take three to four months.

Bohlen urged patience and said it was important to proceed cautiously and safely.

"I recognize that people are impatient but it is very easy to do something that causes a catastrophic failure of the well," he said. "This is a serious well leak but it is not a completely uncontrolled situation."

Although it wouldn't explode, there is a danger that the methane pouring from the well could catch fire, potentially threatening about 100 workers at the site as well as neighbors, Bohlen said.

He also said it appears Southern California Gas didn't violate any rules that might have led to the leak.

In a statement, Southern California Gas said it has been working with the state division since the beginning and Thursday's order formalizes a plan of action already developed under state supervision.

The leaking well is one of 115 wells at the Aliso Canyon site, where natural gas is stored in a vacant underground oil field. It is believed to be the largest natural gas storage facility in the West and is capable of supplying all of Southern California for more than a month.

A public nuisance lawsuit filed by the city attorney on Monday said the leak is releasing an estimated 100,000 pounds of methane an hour into the air. City Attorney Michael Feuer said the emissions of greenhouse gases are the equivalent of 200,000 cars running for a year, and Mayor Eric Garcetti has termed the leak an environmental disaster.

The well site is about a mile from Porter Ranch and Southern California Gas has said the gas disperses without posing any health problems.

However, it contains foul-smelling mercaptans, which are added to the odorless gas so that leaks can be detected. Hundreds of people have complained of headaches, nausea, dizziness and nosebleeds.

No evacuations have been ordered, but the gas company, under orders from the Los Angeles County health department, has provided temporary relocation assistance to some families.

Garcetti has said about 700 families have voluntarily left the area and another 1,000 were applying for relocation help.

Los Angeles County Supervisor Michael Antonovich has said he will ask his colleagues next week to declare a state or emergency over the leak.
Related topics:
los angeleshealthgas leaklos angelescalifornia
Copyright © 2021 by The Associated Press. All Rights Reserved.
CALIFORNIA