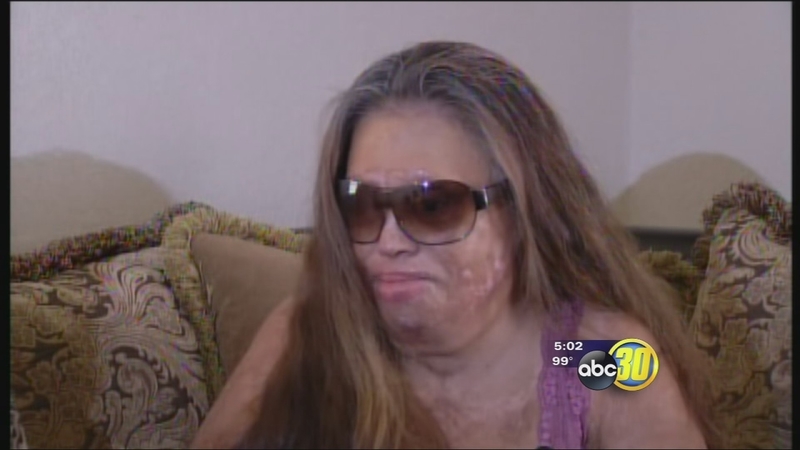 LEMOORE, Calif. (KFSN) -- A Lemoore woman set on fire by her roommate back in 2011 is now speaking to Action News about her recovery and hopes for surgery.

Victoria De La Fuentes was burned over 50 percent of her body when the other woman doused her with gasoline and then lit her on fire.

De La Fuentes is a vibrant person who's full of life. If it weren't for her scars on the outside, you'd never know the traumatic crime she was victim to.

"Next thing I know I'm blinded by this liquid, and all I could hear in a blink of an eye was 'whoosh,'" said De La Fuentes.

After her roommate Chasety Reynolds poured gasoline on her and lit her on fire with a cigarette back in September 2011, De La Fuentes underwent 12 surgeries and was put into a two-month medically-induced coma. She still takes daily medications and visits a specialist several times a year. Reynolds is serving a 12-year to life prison sentence for the crime.

But now, De La Fuentes is hoping for three things to make it easier for her grandchildren to be around her: two ears and an eye.

"I also miss out on my grandkids' extracurricular activities, their football, cheerleading, everything because I'm not, I guess you could say I don't want to be an embarrassment to them," said De La Fuentes.

She says she still hears people call her names or snicker when they see her scars. Scars she seems to wear proudly because she says they've made her the person she is today. She says she's grateful just to have her life.

Now, though, she's hoping people might be able to help her get a prosthetic eye and ears. She's set up a GoFundMe account to raise the money. She's still looking for a doctor in California that will help her do the surgery.

"She's an inspiration to all of us because she has the larger-than-life personality, and she's just very brave and courageous through this. She's never asked for anything," said Cindy Biletnikofm, De La Fuentes' friend.

De La Fuentes says she would be grateful to anyone who would help her feel close to normal again.

"And be able to enjoy all the cherished memories that my grandchildren are creating, my family is creating," she said.

De La Fuentes is hoping to raise $25,000 for her surgery. If you would like to donate, visit www.gofundme.com/losteyeburnvictim.