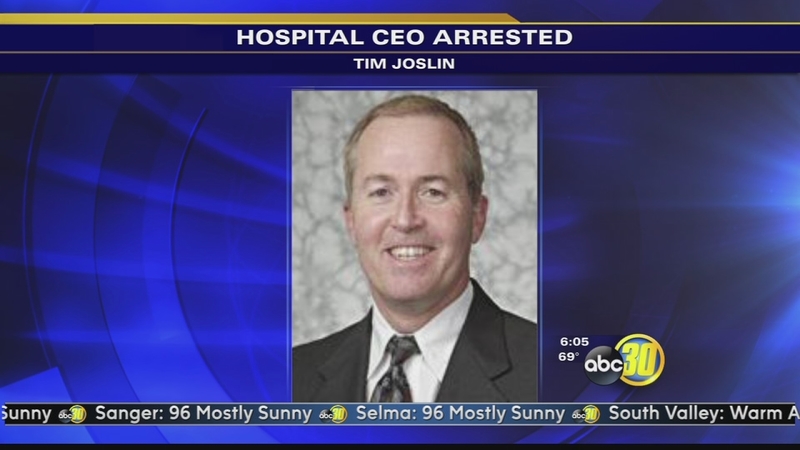 Clovis police arrested Joslin last month and prosecutors are still reviewing the case. But since then, Action News uncovered police reports, medical records, and a secret between lawyers for the parties allegedly involved.

Two months ago, Tim Joslin was the center of attention on Capitol Hill. The Community Medical Centers CEO testified about rural health care at the House Ways and Means committee.

About a month later, he was the center of attention in a felony case. Clovis police reports obtained by Action News show his 41-year-old girlfriend reported he hit her on the head with an iPhone as she tried to break up with him. We also acquired her medical records which show several doctor's visits, including one that night, and a diagnosis of a closed head injury, similar to a concussion. But Joslin's attorney denies the accusations.

"Mr. Joslin has absolutely no criminal history, no indications of violence in his history whatsoever and he did not engage in domestic violence in this case," said Jeff Hammerschmidt.

In police reports, officers who interviewed Joslin a day after the incident say they found a video surveillance system, but when they reviewed it, three minutes were missing right around the time the alleged victim left the house.

A sergeant told Joslin he thought the video had been deleted. The 55-year-old denied it. Prosecutors tell Action News they're still reviewing the case and attorneys involved in the case believe police are still conducting a forensic review of the video. But in the meantime, the alleged victim hired civil attorney Jacob Rivas for a possible lawsuit. He sent a letter offering to discuss a resolution of both the civil and criminal cases -- a letter he calls a typical demand letter in a civil case. But Joslin's criminal defense attorney Jeff Hammerschmidt interpreted it as extortion and he then secretly recorded a phone call with Rivas.

"She's willing to settle the claim for 300 grand, ok?" Rivas said in the call. "OK," said Hammerschmidt. "And in exchange for that, she won't testify," Rivas said.

ABC30 legal analyst Tony Capozzi says the California State Bar may have to review whether Rivas crossed a line with his letter and offer because he can't stick his hands in the criminal case. But he says Rivas and Hammerschmidt both seem to be looking out for their client's best interests.

"Both attorneys here are trying to get the upper edge in their case," Capozzi said.

Rivas says he believes Hammerschmidt had no legal right to record the conversation. But ultimately, he says the extortion claims are nothing but a smokescreen. "It's not about me," he said. "It's not about him. It's about our clients. It's about what his client did to my client. He's attempting to deflect that and confuse the issues, but in reality, he can't escape what the police reports say. He can't escape what the medical reports say."

Community Medical Center's board of trustees chair told us the allegations seem very out-of-character for Joslin, and they'll wait to see what the investigation concludes. Clovis police didn't want to discuss the ongoing investigation.

Action News has acquired police reports from August 25, the day after Joslin allegedly attacked a girlfriend. Police say the 41-year-old victim reported Joslin hit her on the head with an iPhone as she tried to break up with him. She went to urgent care right afterwards and reported the incident to police the next day, although she said she worried he could have her fired from a job at Sante Community Physicians, a health care provider partnered with Community Medical Centers.

Police went to Joslin's house and interviewed him. At first, the reports say, Joslin denied any physical confrontation. According to the reports, when officers asked for access to Joslin's home video surveillance system, they say he acted like he didn't know how to use it. But when they finally got to the video, they say a three-minute portion was missing. Reports indicate police told Joslin they believe he deleted the video. They arrested him and collected the evidence. At that point, Joslin claimed she slapped him, and he pushed her out the door.

Joslin posted bail and has been out of jail ever since.

Prosecutors have not yet filed charges, but they tell Action News they're still reviewing the case. Attorneys involved in the case believe police are still conducting a forensic review of the video.

A month later, the woman's attorney, Jacob Rivas, says she still suffers from the effects of the attack. Medical records obtained by Action News show she suffered a "closed head wound." She also reports headaches and blurred vision, which she believes are the effects of a concussion. The police report indicates she had a large bump on her head and ringing in her ears when she reported the crime.

Action News acquired a civil demand letter Rivas sent Joslin in which he asks to discuss the matter "to determine if we can reach a global resolution of the civil AND criminal cases arising out of the incident." He calls it a standard demand letter in civil cases.

Joslin's attorney, Jeff Hammerschmidt, interpreted it as extortion, though. He then secretly recorded a conversation with Rivas in which the civil attorney asks for $300,000 and says that would prevent the alleged victim from reporting her story to the media and the board of directors at Community Medical Centers, as well as ensure she wouldn't testify in criminal proceedings.

Hammerschmidt reported what he calls extortion to the district attorney's office. Rivas says Hammerschmidt is just deflecting from his client's criminal act.