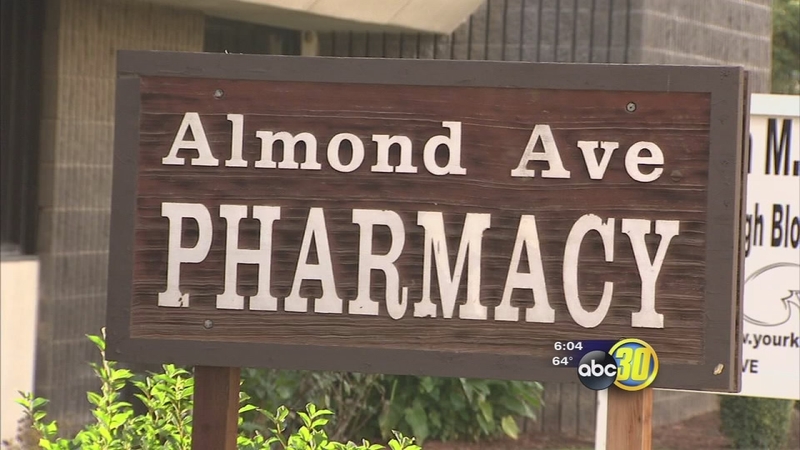 MADERA, Calif. (KFSN) -- Valley pharmacies are being urged to keep their cough medicine locked up. Burglars have hit pharmacies in Madera, taking bottles of a codeine-based syrup.

It's popularly known in the Rap and Hip Hop world as "Purple Drank." It's prescription cough medicine, containing the narcotic codeine and an antihistamine -- promethazine. It works like heroin and it's just as addictive.

Madera Police Det. Josh Chavez tells Action News it's popular with kids. "Typically it's consumed with soft drinks and they use some type of hard candy, such as a Jolly Rancher, to sweeten the flavor," he said. "Recently it's been much more popular with young people at parties."

In large doses it can lead to unconsciousness and is used as a date rape drug. The young people are getting it from thieves who are breaking in and robbing pharmacies and selling it for $250 a pint.

The Almond Avenue Pharmacy was the latest casualty. It was burglarized on December 5th, following three other theft and break-ins since the end of September. Last year the pharmacy was the scene of a deadly confrontation. Two armed men came in with guns blazing, wounding a pharmacy employee before the pharmacist shot and killed one of them. They were after cough medicine.

After being burglarized on October 19th, the New Life Pharmacy took police advice and moved its codeine cough syrups into a vault. Burglars struck again on December 30th, but left empty-handed. Police are studying surveillance videos and urging other pharmacies to take precautions.