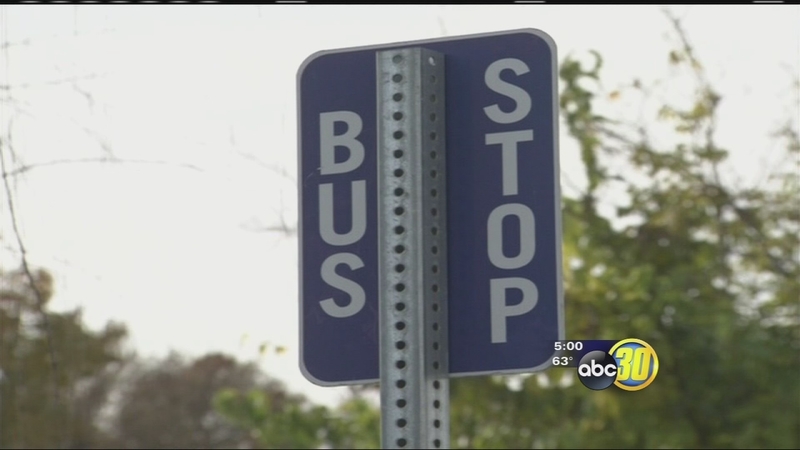 GOSHEN, Calif. (KFSN) -- South Valley detectives are looking for a man they said tried to lure two kids onto a bus just after sundown on Friday.

Investigators said a mom stepped in confronting the man. Now the detectives are trying to find him.

Just outside a neighborhood in Goshen, two kids found themselves in a scary situation. The Tulare County Sheriff's Office said on Friday evening a man waiting at a bus stop near Avenue 310 and Robinson Road tried to get them to go with him on the next bus. He said he'd take them to Walmart. Teresa Douglass with the Sheriff's Office said the kids didn't go and mom heard it all. "The older child was looking out for the younger child and the mother questioned the man as to why he was talking to the children."

We've learned the kids were just dropped off by their school bus near the city bus stop. Their mom met them there, and after confronting the man, he made his getaway on a Visalia city bus. "This family was truly a shining example of how to prevent what could have been a terrible situation."

The incident has neighbors on edge, keeping a closer eye on their own kids.

The sheriff's office is looking for the man and Visalia transit is also investigating. All city buses have surveillance cameras and drivers are trained to look out for younger riders.
The sheriff's office hopes this is a lesson to all families-- a reminder talk with your kids.

The sheriff's office said the man they're looking for is in his 50's or 60's with a gray mustache, five foot six inches, around 190 pounds.