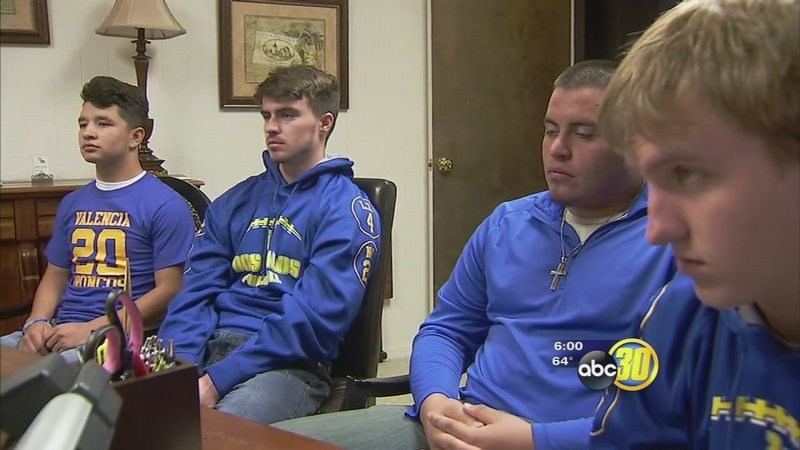 MERCED, Calif. (KFSN) -- Four Dos Palos High School football players who were arrested for allegedly hazing a younger player are now speaking out in hopes of returning to school.

The four players have not been allowed to step foot inside the Dos Palos campus for 50 days. Attorneys said that in about a week, they will hear back from an administrative board that will recommend whether they should be let back into the campus or expelled.

"They're calling us rapists, child molesters," said Lane Zuspan, who was arrested for the incident.

Zuspan said he and his three other teammates have heard it all.

"Nothing close to what they're trying to say happened," he said.

Zuspan - along with Brandon Doucette, George Escalante and Nathon Valencia - were arrested in September after allegedly hazing a younger player in the Dos Palos High School locker room. They're charged with false imprisonment and hazing.

Their attorney, Chantelle Andrews, said they've just wrapped up several hearings in front of an administrative panel after the school recommended to expel them.

"We don't understand why the school is going forward with any sexual charges, and anyone who was is the hearing yesterday could've seen that there was nothing sexual that went on in this locker," Andrews said.

The boys are calling it just horseplay, nothing violent. They said the victim was mouthing off to the varsity players and while joking around, they "credit carded" him while he was still clothed.

"You swipe your hand through the butt cheeks, basically," Doucette explained.

The school cannot comment on any of the charges but confirm the administrative panel is looking at their case.

"That hearing has been completed and making recommendations," William Spalding with the school district said.

Since then, the boys claim the reaction from the community to both them and their families has been heartbreaking.

"My mom at night has been praying and crying," Valencia said.

Andrews said teachers have been sending work home for the boys. Zuspan said this has not only affected his current education but his future and that he was talking to schools who wanted to offer him a full-ride scholarship for football until he was arrested.

"I'm completely missing my window to apply to college," Zuspan said. "I can't go to a four-year, I have to go to a JC."

"We need to be back and continue our education," Escalante said.