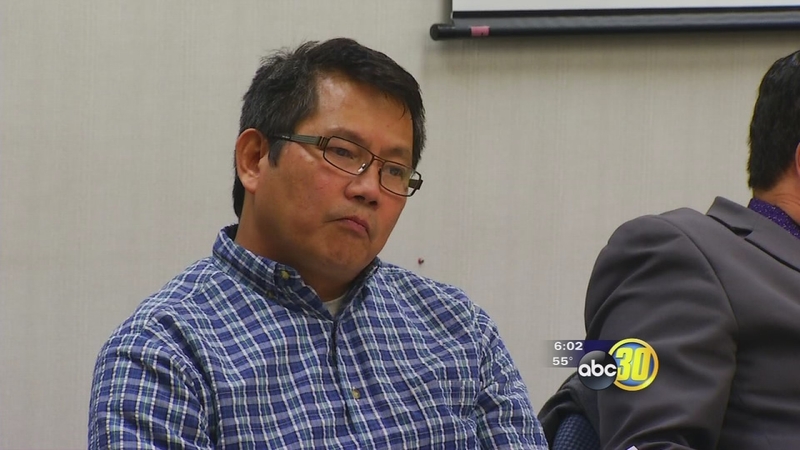 FRESNO, Calif. (KFSN) -- Former Fresno Unified School District janitor Benjamin Wong is facing six misdemeanor charges, but he denied every accusation the kids made during his trial on Monday.

Wong acknowledges he touched students at Norseman Elementary School and administrators warned him a few times to knock it off. But he says it was all innocent, and he doesn't understand why he's on trial for these crimes.

Wong heard the warnings. Students accused him of unwanted touching and his principal and vice principal called him into the office.

"Before I go, he/she just mention me that, 'Next time Benny, don't get too close to the kids,' he told the court.

Wong said the discussion was mainly about patting the kids' heads, but the vice principal's notes said he also talked to Wong about rubbing their shoulders. In court, the accusations were much worse.

Children testified that the one guy they were scared of at school was the janitor and several girls said he touched them on the bottom. Wong said he only touched a boy on the bottom once and that was to get him going in the right direction in the hallway.

A 10-year-old girl, who Wong described as a friend, said he stroked her hair in a way that made her uncomfortable.

"I play around with the kids who are really familiar with me, that's why," Wong said. "I am familiar with (the student,) but I don't touch her the way they think, sexually."

Wong says he kept his distance from students after the warnings but couldn't always avoid contact in places like the cafeteria. He said he's not sexually interested in children and never has been.

"Did you ever molest (the student), an attorney asked Wong.

"No, please," he replied tearfully.