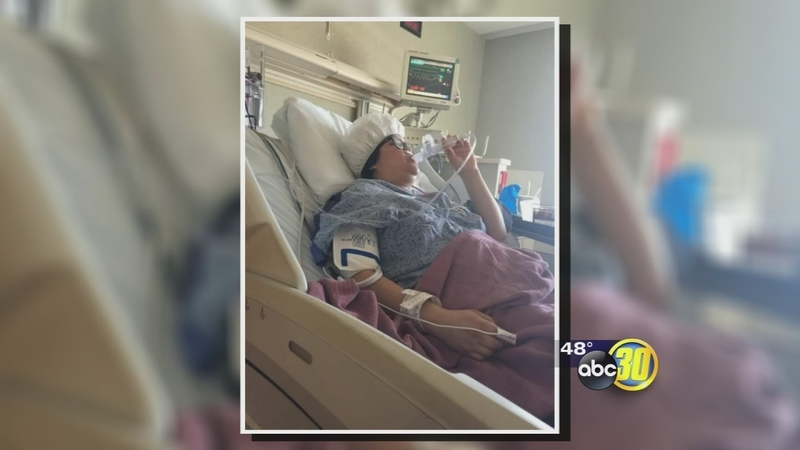 FRESNO, Calif. (KFSN) -- With eight staples, six plates and two bolts sitting in her back, Marilyn Herrea sat on her sofa at home, recalling the horrific Christmas accident that almost took her life.

"I remember trying to hold the steering wheel down and the glass shattering," she said.

The Fresno woman was hit by a drunk driver on Christmas, and she is begging people to not drink and drive this holiday weekend.

The 20-year-old Fresno City College student says that crash left her with a number of serious injuries. She just got out of the hospital Thursday after being treated for five days.

Herrea says her life has changed drastically because of her injuries. She won't be able to return to school next semester or go to work all because a driver got behind the wheel drunk.

A man in his 50s smashed into her car while she was stopped at a light at the intersection of Highway 41 and Central Avenue in Fresno County.

"The airbag hit my chest," she said. "It was very hard to breathe. I was in so much pain."

Before first-responders arrived, two women rushed to her aid and the driver of the car that hit her did too. He was under the influence of alcohol.

"I was in the car yelling at the car, 'Why did he skip the red light?' And he was just holding his head," she recalled.

While on the way to the hospital, Herrea says she was fighting to stay alive.

"I kept tapping the EMT and holding his hand because I honestly did not want to die," she said.

After an extensive back surgery, the young Fresno woman now has to use a walker, take numerous pain medications and rely on family to do things she once could do on her own.

"Even a shower, the most simple thing, brushing my teeth hurts my shoulders, hurt laying down," Herrea said.

She says this all could have been avoided had the man who hit her not gotten behind the wheel intoxicated.

"Anybody knows they should not be behind a vehicle under the influence of anything," she said.

And she wants those going out for new years eve to keep that in mind.

"You probably spend $5 on a drink more, probably it doesn't hurt to spend $5 to $10 to $15 on a drive home when you know you're going to get home safe not hurting anybody," she said.

Herrea says she wanted to become a police officer but it is something she is not sure she is going to be able to do now because of her injuries.