KFSN
FRESNO, Calif. (KFSN) -- The wreckage was visible in sight of neighbors and friends in the close knit community of airplane enthusiasts. Terry Roberts recalls hearing, then seeing, the plane fly over his home just before it went down.

The pilot, William Huene, and passenger, Chase Splan, are presumed to have died on impact. The wreckage was upside down on the edge of a large pond in a state wildlife refuge just below the Skypark.

"A sad day for the family and friends-- prayers and wishes go out to the family members and the community," said Roberts.

An investigator from the National Transportation Safety Board is on the scene.

We spoke with NTSB spokesman Peter Knudsen by phone from Washington.

"What he's going to be focusing on is documenting the accident site and any perishable evidence; this will include recovering the aircraft."

A preliminary report will take about a week, but final findings may take up to a year.

The plane, an Express S 90, is considered experimental, which means it's assembled from a kit. Many of the pilots out here build their own planes and the NTSB said they are not necessarily less safe than factory built planes.

"The statistics on overall accident rates are not terribly different from manufactured aircraft, there are some differences but overall it's a very similar accident rate," said Knudsen.

Pilot William Huene was involved in another crash near Fresno in 2002. He and his passenger escaped injury.

Chase Splan, a young husband and father, lost his father Paul in the crash of an ultralight aircraft near Tracy 9 years ago.

The NTSB plans to remove the wreckage as soon as possible and take it to a secure location where the investigation can continue.

Friends of the pilot told us he had only recently acquired the plane. According to the FAA it was certified just two years ago.
Related topics:
fresno northwestfresnoinvestigationplane crash
Copyright © 2021 KFSN-TV. All Rights Reserved.
RELATED 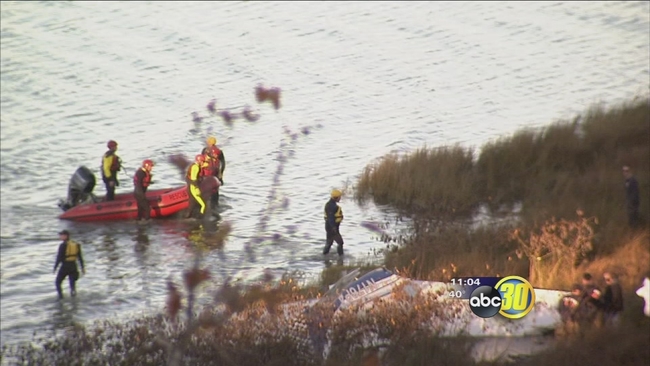