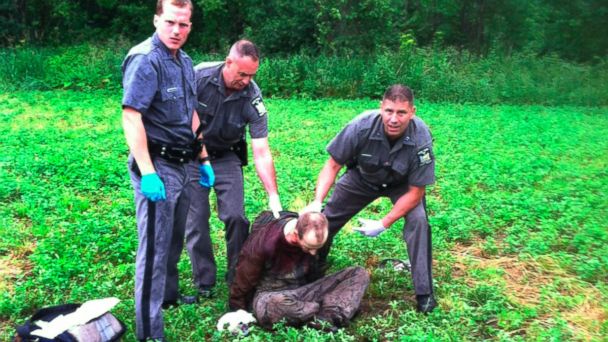 Convicted murderer David Sweat is hospitalized in critical condition after being shot and captured today, more than three weeks after he escaped from a maximum security prison in upstate New York.

At about 3:20 p.m., State Police Sgt. Jay Cook was alone on a routine patrol when he spotted Sweat on a road near Route 30 and ordered him to stop, a source familiar with the investigation said. When Sweat started to run, the sergeant opened fire, the source said.

Sweat was in critical condition at Albany Medical Center, an official there said Sunday evening, after being transferred from Alice Hyde Medical Center in Malone, New York.

No law enforcement personnel were injured during the capture, an official briefed on the manhunt said.

Sweat has not yet been interviewed by investigators, D'Amico said.

The man who escaped with Sweat, Richard Matt, was shot and killed by a border patrol SWAT team Friday afternoon in Elephant's Head, New York, just 50 miles away from the prison, after he was spotted by a law enforcement officer in the woods.

Matt and Sweat may have been using picnic-style pepper shakers to throw their scent off the dogs tracking them, D'Amico said today.

Authorities had found Sweat's DNA on remnants of food about a mile from where Matt was shot and killed.

On Friday afternoon before Matt was killed, officials announced they had reason to believe Sweat and Matt were planning to head to the border in a final play for freedom. As a result, U.S. and Canadian law enforcement sent in reinforcements in an effort to both squeeze the escapees and keep them from potentially making it out of the country.

Today Cuomo called the escape "an extraordinary situation in many ways."

"If you were writing a movie plot, they would say this was overdone," he said.

Matt and Sweat used power tools to cut through the back of their adjacent cells on June 6 at the Clinton Correctional Facility in Dannemora, New York, about 20 miles south of the Canadian border, police said. They broke through a brick wall, then cut into a steam pipe and slithered through it, finally emerging outside the prison walls through a manhole.

More than 1,000 corrections officers and law enforcement officers were involved in the search.

Cuomo said today, "This was an unprecedented coming together of law enforcement on every level."

"Anyone ... who was guilty of cooperating in this escape will be fully prosecuted," Cuomo said today.