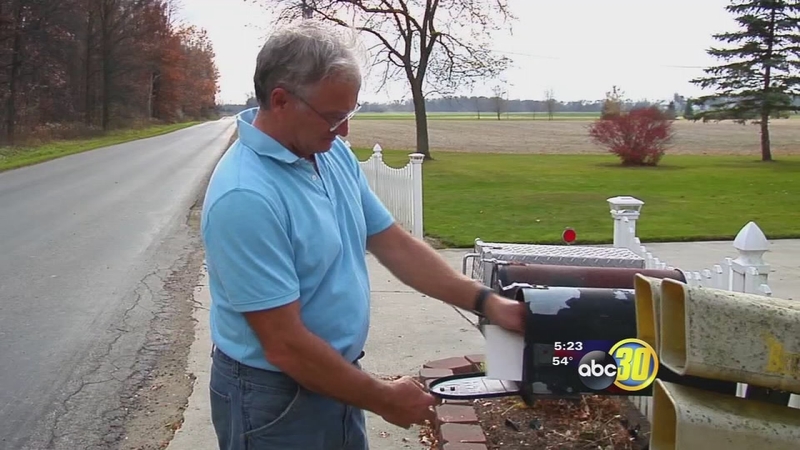 FRESNO, Calif. (KFSN) -- You might think your mailbox is off limits to con artists. Unfortunately, US postal experts say that's not the case.

"We first noticed we had some mail that was scattered down the road," said Jeff McAfee, fraud victim

McAfee and his family didn't think much of it, he thought the wind blew the box open. "We had another package that we had ordered and had a tracking number and tracked it and supposedly it was delivered and never saw it."

Now they were suspicious and called the local post office to report the problem. McAfee wasn't alone. Several neighbors had reported missing packages and mail. "You feel a little violated, you know."

So, postal inspectors decided to set up a sting operation. "Asked them if they would be willing to participate in having a test gift card placed in their mailbox with a red flag up," said Andrew Gottfried, US Postal Inspector.

Inspectors tracked how the gift cards were used. "I was able to obtain surveillance video from Target retail store," said Gottfried.

Evidence quickly led authorities to Nathan Arnold who was delivering newspapers in the neighborhood.

Inspectors said more is at stake than just cash and gift cards. "They are also looking for checks with account numbers, routing numbers, they are looking for any credit card numbers that they can obtain through the mail," said Gottfried.

The best way to avoid ID theft and losses is to drop all outgoing mail at a post office or blue collection box. "It was kind of a surprise to me that, you know, somebody would be riffling through the mail and that, you know-- you just have to be kind of careful and make sure you pick up your mail diligently," said McAfee.