Shanty town next to AG land to be torn down 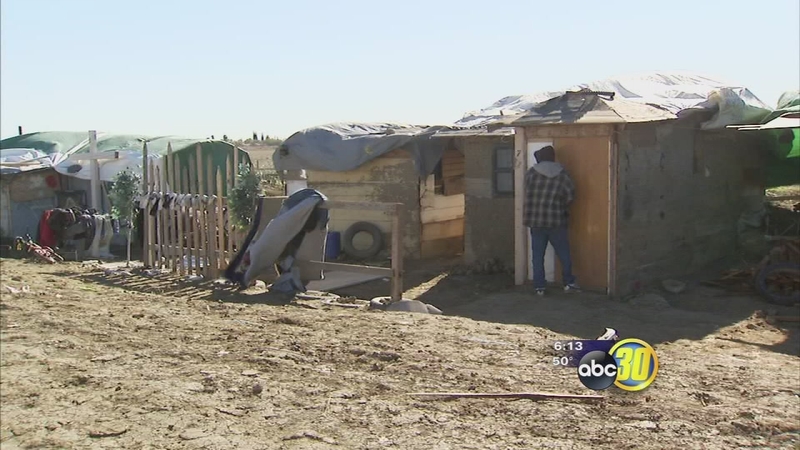 Shanty town next to AG land to be torn down

MENDOTA, Calif. (KFSN) -- A homeless camp which went up outside Mendota over the past year was set to be demolished this week.

The image of the shanty town is one folks in the area would like to erase. Some people who live in the homeless camp couldn't find enough work due to the drought to pay for rent somewhere else. Howling winds threatened to tear the roofs off the structures in the encampment along highway 33 near Mendota.

About 30 people including kids live in the 19 makeshift homes. Moses Macias is a deacon for New Beginning Pentecostal Church. He explained, "There are people here that have jobs, but they can only afford to eat and maybe get the little things they need, but they can't afford rent so they come out here."

Last week Fresno County posted notices to vacate the property by Wednesday morning. In a statement Westlands said, "Aid organizations have been notified that the encampment families will be relocated and are prepared to offer services and shelter."

Macias said, "Some say they're going to have to probably go into abandoned houses. Some say they'd be willing to do something so they can go to jail because it's better than being out here in the cold."

Some people have donated scrap wood so families can stay warm.

The shanty town is not in Mendota city limits, but Mayor Robert Silva said the time has come to remove the encampment. Silva said, "It's unhealthy and unsightly. It's just dangerous for people to be living in a canal."

Silva has asked the county and Westlands to clean up the property. He added agencies have been willing to help the residents, but they don't want to move. "We had gone out there many times. Our PD has gone out there, our churches have gone out there, that there's available space in some apartments. The Housing Authority has been notified."

Macias was asking for more time from Westlands on behalf of the homeless who aren't ready to move on. "Just have more compassion. Give us maybe a little more time to find a spot for them. At least give them a way out maybe. Just find something. These people are human too."