So far, the Wragg Fire has charred at least 6,900 acres and is 20 percent contained, but some firefighters are optimistic on Friday. "What we've seen on the Wragg Fire yesterday, the weather is actually worked in the firefighters favor so the increase in humidity and a little bit of light near the winds has helped us get a little more containment on the fire. We haven't seen the extremely large plumes as we did the first day. We expect that to continue today and unless we have unforseen extreme weather events we should be making more progress on this fire," Cal Fire Information Officer Rick Vogt said.

The fire came really close to a house blazing right through where someone likes to relax and take in the view, but firefighters saved it along with countless others in the evacuated Quail Canyon area.

Over 1,500 firefighters are working to contain the fire. A base camp for the firefighters has been set up at Lagoon Valley Park in Vacaville.

Officials say the fire is threatening 150 structures. It has already damaged one structure, destroyed at least one outbuilding and tent trailer.

The communities of Quail Ridge and Canyon Creek are still under mandatory evacuation orders. Officials have reopened Highway 128 and are focusing on repopulating remaining evacuated areas.


Evacuations have been lifted in the Golden Bear Estates Area and for residents on County Road 87. Officials are still working to lift evacuations in other areas to bring at least 200 people home.

A warning has been issued after officials noticed the retardant used to battle the fire may be contaminating the water in the Quail Canyon area.

The most active part of the fire, which broke out Wednesday, was burning along a mountain range in a remote area several miles from the highway that feeds into the park for Lake Berryessa, one of the largest bodies of fresh water in California. It was partially contained early Friday.

The fire is less than an hour's drive to California's famed Napa Valley wine country, but no vineyards were in immediate danger. "It's pretty far away from the Napa Valley," said Amy Head, state fire spokeswoman. "Fine to go into the Napa Valley and do tastings."

Businesses closer to the wildfires also say commerce is not affected, with customers buying wine and renting cabins and boats by Lake Berryessa.

Terry Sparkman, general manager of Pleasure Cove Resort & Marina, which is a few miles west of the wildfires, said people may have to drive an extra 40 miles to get there, but they do. "You're getting the last few weeks before school starts and getting all the fun you can," he said.

Still, Marcia Ritz, owner of the Spanish Flat Country and Deli in Napa, said she worried about the impact the fire would have on tourism. "We have the resorts up here, and in the summertime, we depend on them," Ritz said.

Meanwhile, a new fire that broke out Thursday afternoon in the Sierra Nevada southwest of Lake Tahoe grew to 100 acres in heavy timber.

It was burning on both sides of the American River and U.S. Highway 50, which was closed about 60 miles east of Sacramento

Officials say the cause of this fire is under investigation.

The Red Cross has opened an Evacuation Center at the Winters Community Center at 201 Railroad Ave in Winters. A large animal evacuation center is opened at 29775 County Road 31 in Winters. Fore more information about evacuations, click here.

Firefighters breaking bread before heading out to kick the fire's booty at the #wraggfire #bestmealoftheday pic.twitter.com/ebUnJ8aeew 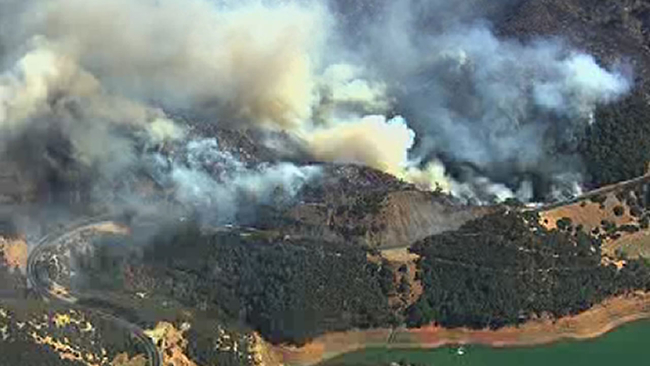