'He walked past me, grabbed an apple, started eating it and walked out the front door'
KFSN
By Joyeeta Biswas 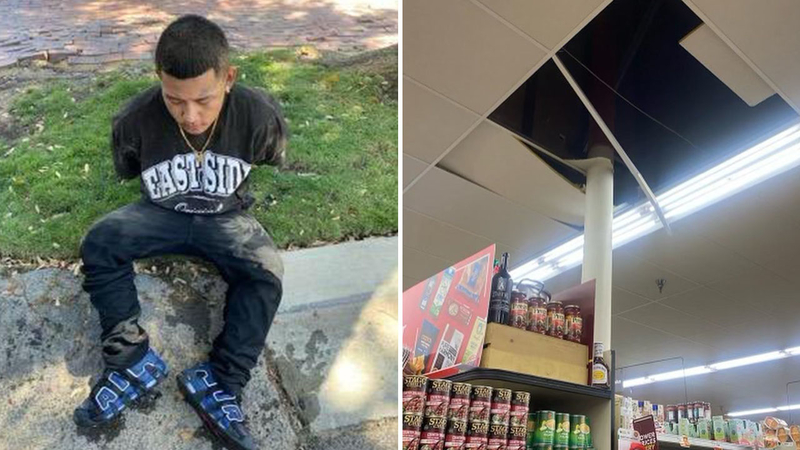 ABC30 editor spots suspect in Save Mart store, then jumps into action

FRESNO, Calif. (KFSN) -- An ABC30 editor spotted suspect Pheng Vang in the Save Mart he was hiding in and alerted store employees, minutes before he was arrested by Fresno police.

Editor Andrea Guyton was shopping in the grocery store on Saturday afternoon when she saw the 28-year-old burglary suspect.

"I recognized him almost immediately because of the tattoo he had, the fact that he was covered in dirt, and it was just so strange that he was coming out." Guyton says. "At first I was frozen, I was just like, 'Wait, is this the guy?' And then as he was walking closer, I saw the tattoo, and I was just like 'Oh my gosh, this is him!'"

Guyton says they were both in the produce section of the store.

"We made eye contact for a little while. He walked past me, grabbed an apple, started eating it and walked out the front door," she says.

No one else seemed to have recognized the man who had been at the center of a high-profile 20-hour standoff with police and a lockdown of surrounding businesses and schools just the day before.

RELATED: Fresno police catch suspect after he falls out of Save Mart ceiling

"After he left, I was like 'You guys, that was him, like this was the guy.' And then I told the store employee because he didn't know who he was either and so I told him, I was like, 'No you need to call the cops because this was the guy'," she says.

Guyton says the Save Mart employees were shocked, because they believed the store was safe. Police announced late Friday that Vang had likely escaped from the area.

Minutes after Guyton's encounter with Vang, he was arrested by police as he tried to escape into a nearby apartment complex.

We do not know whether Guyton's actions played a role in Vang's arrest, or if officers spotted the suspect independently.

After the arrest, police said that although they had reopened the shopping center Friday afternoon, they left undercover officers and units nearby.

Guess who feel through the Savemart ceiling today? While we may have pulled back our visible SWAT operation, we left undercover detectives in place. When suspect Pheng Vang began to run, our MAGEC detectives and Northeast patrol officers were quick to apprehend him. pic.twitter.com/yodRDX4EBG

As for Guyton, she says she might take some time to recover from the encounter.

"I'm still shaking a little bit because that was the closest I've ever been to a story," she says.