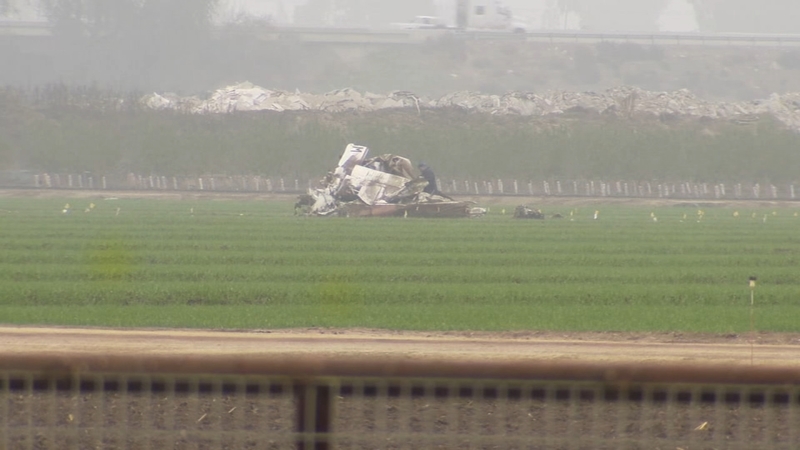 VISALIA, Calif. (KFSN) -- Authorities have identified the four people killed in a plane crash near the Visalia airport over the weekend.
The Tulare County Sheriff's Office says 78-year-old David Chelini, his 58-year-old nephew Steven Chelini, and his two daughters, 46-year-old Karen Baker and 48-year-old Donna Chelini were killed in Saturday's crash. The family is from the Sacramento area.


The single-engine Beechcraft Bonanza aircraft took off from Visalia Municipal Airport at about 6:40 pm, then crashed just 16 seconds later at Road 68 and Avenue 288, just west of the airport.

Investigators from the Federal Aviation Administration (FAA) and the National Transportation Safety Board (NTSB) arrived in the South Valley on Sunday to begin looking into why the plane was derailed just moments after it took off.

First responders say the fog was thick when they arrived.
With no fire from the crash, it wasn't easy to immediately find the plane.

"When we all responded, we were searching for the plane," said Sgt. Jesse Cox with the sheriff's office.

"The area is a large reservoir area and it's hard to get back there. We need to go on foot... We just circulated the area as much personnel as we had until we found it," he added.


Once the plane was found, the sheriff's office confirmed all four people on board died in the crash.

The National Transportation Safety Board and Federal Aviation Administration arrived Sunday afternoon to take over the investigation.
The NTSB says the wreckage field from the crash is about 500 feet long, with debris scattered in all directions.

Investigators are taking photographs and conducting the ground investigation before the plane is moved to a secure location for further analysis.