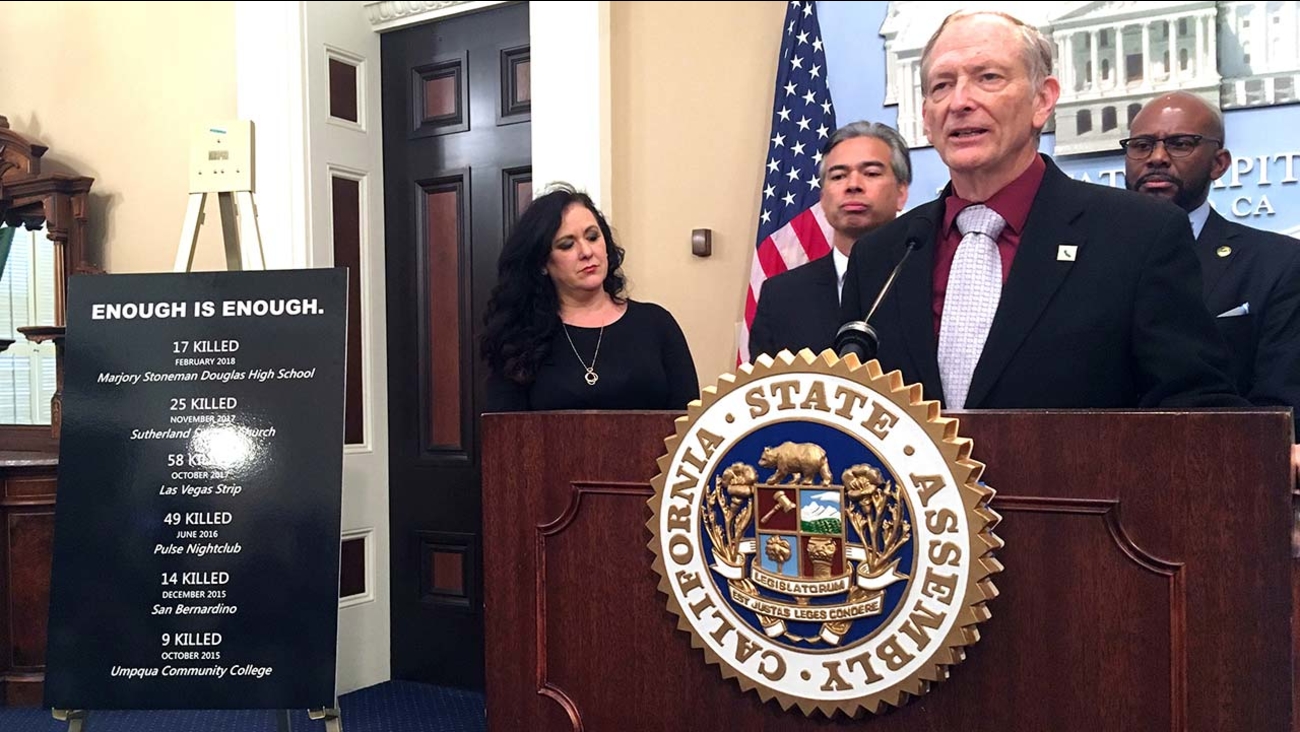 The proposals to be considered later this spring include expanding the definition of assault rifles; expanding gun violence restraining orders; letting individuals block themselves from buying guns; and cracking down on homemade "ghost guns."

Recent shootings including the Feb. 14 slayings of 17 people at a Florida high school show California can do more to restrict gun violence, Democratic Assembly members said.

"While I am proud to say that California is home to some of the strictest gun laws in the nation, you know there is still work to be done," said Assemblyman Bill Quirk of Hayward.

One bill would expand California's assault weapon definition to include high-powered semi-automatic rifles without fixed magazines, though most .22 rifles would be excluded. The current definition requires the rifle to have things like a pistol grip or other military-style fixtures. An estimated half-million owners would have to register approximately two million guns with the state Department of Justice if the bill becomes law, although a similar attempt by Assemblyman David Chiu of San Francisco failed to advance in 2016.

"Once again you have politicians attempting to capitalize on yet another tragedy," Firearms Policy Coalition spokesman Craig DeLuz said in an email. Instead of concentrating on protecting school children, he said elected officials are targeting law-abiding gun owners.

Assemblyman Phil Ting of San Francisco again wants to expand the ability for some to seek gun violence restraining orders. Current California law lets family members and police ask a judge to remove firearms for up to one year from a relative who appears to pose a threat. Ting's bill would add high school and college personnel, employers, co-workers and mental health professionals.

A companion bill by Assemblywoman Blanca Rubio of Baldwin Park would let judges issue such orders orally, based on statements by police, if there is an urgent need. Her second bill would impose lifetime firearm bans for those convicted of misdemeanor domestic violence.

- Law enforcement agencies would have to put information on recovered firearms into a state database under a bill by Quirk.

- A bill by Assemblyman Rob Bonta of Oakland would allow individuals to add themselves to the state's "do not sell" list if they feel they might be a danger to themselves or others.

- The state would require background checks for anyone buying a key part that is used to assemble an assault weapon at home under a bill by Assemblyman Mike Gipson of Carson.

- Public agencies hosting gun buy-backs would be barred from issuing gift cards from retailers who sell guns under a bill by Assemblywoman Lorena Gonzalez Fletcher of San Diego.