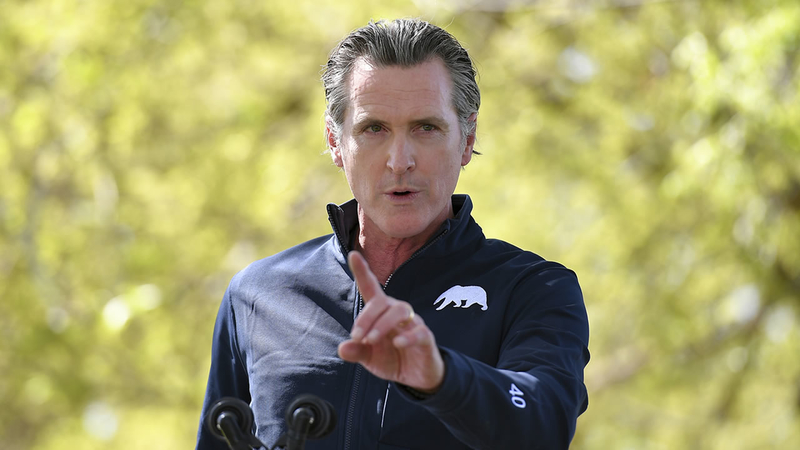 SAN FRANCISCO -- With the recall election of California Governor Gavin Newsom all but inevitable, supporters of the effort have now entered what they're calling "phase two" of the campaign -- the period where they hope to finish the job and successfully remove Newsom from office.

ABC7 News was first to obtain a 12-page document that outlines how "Rescue California," one of the groups behind the recall, hopes to do it.

The prospective document, which has been circulated among some high-level Republicans and potential donors, and confirmed by "Rescue California," shows a campaign underway to weaken Newsom and generate support for the recall through a variety of strategies. Among them, to create a "Volunteer Citizens Brigade" that will identify potential supporters, "ballot harvest" Republican votes, and target Latino, APPI and Independent voters.

The group also said they plan to create a "Recall CARE FOR KIDS" drive to distribute backpacks and school supplies to neighborhoods with schools most impacted by the pandemic and school closures. Anne Dunsmore, campaign manager of Rescue California, later told ABC7 News this will be handled by the Recall Gavin 2020 campaign not Rescue California.

The total proposed budget for their efforts: $15 million.

"While the candidates will necessarily spend millions promoting themselves, Rescue California will be the united campaign effort to secure the YES vote in favor of the Recall," the document states.

According to the California Secretary of State's office, recall supporters submitted 1.719 million verified signatures -- nearly 225,000 more than the amount needed to qualify. There is now a 30-day period where people can withdraw their signatures, however both supporters and detractors of the recall are operating under the assumption it will qualify.

An election is likely to happen this fall.

On the ballot, voters will be asked two separate questions. First, do you want to recall Governor Newsom, yes or no? And second, if Newsom is recalled, who would you like to replace him?

For Newsom to win, more than 50% of voters must vote "no" on the first question about the recall. Recent polling from the Public Policy Institute of California shows the recall would fail with 56% of likely voters currently against it.

That's where Rescue California comes in. The group says they plan to focus solely on getting more people to support the recall -- and here's how.

'Volunteer Citizens Brigade'
According to the document obtained by ABC7 News, Rescue California is creating a "Volunteer Citizens Brigade" made up of the massive volunteer network built during the signature gathering phase of their campaign, which included 5,000 regular volunteers and up to 20,000 on weekends. The document states that the "ultimate success" of their campaign will hinge on this volunteer group and its ability to execute an "unprecedented campaign material distribution, Ballot Harvesting and GOTV campaign."

Members of this team will distribute palm cards, bumper stickers and informational materials at 800 permanent Recall Booths across the state and at hundreds of other temporary locations including fairs and rallies. The group also plans to distribute at least half a million yard signs statewide in the hopes of "disheartening the opposition and creating continued enthusiasm for the Recall."

'Ballot Harvesting'
Rescue California says a main focus of their "Volunteer Citizens Brigade" will be to do targeted "ballot harvesting" of Republican voters in all 58 counties to create a "massive GOP turnout advantage."

"We will contact all 5.3 million Republican voters in the state through door-to-door canvassing, texting, emailing, mail and phone calls to 'harvest' ballots, creating a GOP wave capable of overcoming the Democrat's registration advantage in the state," the document states.

"Ballot harvesting" is a term used to describe a law that allows third parties to collect and deliver ballots. It is legal in California, however Republicans have decried the practice. During the 2020 presidential campaign, President Trump tweeted: "GET RID OF BALLOT HARVESTING, IT IS RAMPANT WITH FRAUD."

RELATED: What does it take to run in the California recall? A few thousand dollars, some signatures, and a dream

The group also plans to target Latino voters across the state. ( Experts predict Latinos will be key in determining the outcome of the race, and will likely be about one-fifth of all the voters in this recall election.)

Rescue California says they have "identified a large pool of regular Californians willing to tell their stories about the failures of Gavin Newsom," which they plan to feature in media appearances and ads. "The face of the Recall will be as diverse as the state and decidedly non-partisan, with a special emphasis on Latino voters," the document states.

A more recent version of the document also says Rescue California will target AAPI voters and plan to spend $1.3 million on Latino and APPI outreach. "Both were harmed by Newsom's economic shutdowns and are open to the Recall," the new document states.

'Newsom Truth Squad'
The document also states that Rescue California is assembling a team of non-partisan elected officials to act as a "Newsom Truth Squad" throughout the campaign. This group will be made up of county supervisors, mayors, city councilmembers, sheriffs and district attorneys. "These officials will fact-check Newsom as he campaigns and alert the news media to exaggerations and flat-out lies," the document states.

Raising Money
The document states that all in all their entire projected budget over the coming months is $15 million. By comparison, Rescue California reported bringing in $2.182 million in the filing period between January 1st, 2021 and March 31st, 2021.

The document also includes an initiation to supporters to attend a fundraiser at the home of prominent Newport Beach donors, Buck and Colleen Johns, on Thursday, May 20th at 7:30pm. The flyer says the event will have an open bar, BBQ and music performances by Grammy & Platinum artists. Attendees can choose from "The French Laundry Level" for $10,000 per couple, the "Lockdown Level" for $5,000 per couple, or "EDD Fraud Level" for $1,000 per couple. There is also a general attendee ticket for $250.

In addition, on a separate page, there is a pledge form where potential volunteers and donors can sign up for different committees and coalitions, including an "African American coalition," "Hispanic Americans coalition," "LGBTQ coalition," "Crime Victims/Public Safety coalition," and "Small Business coalition."

You can read the full document here.